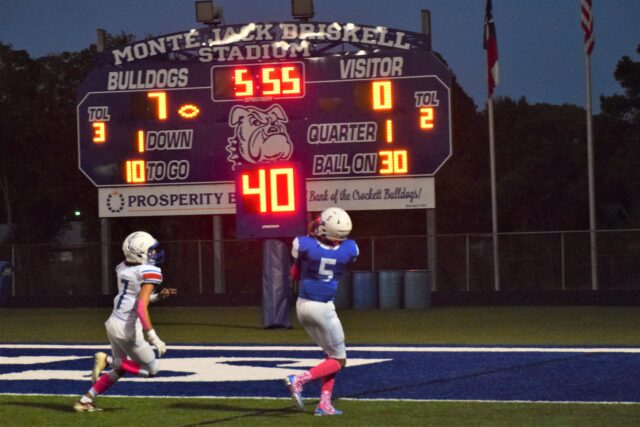 CROCKETT – It was Homecoming in Crockett last Friday which meant there were plenty of distractions available to sidetrack the Bulldogs before they took on the Elkhart Elks in a District 9-3A DI contest.

Once the game got underway, it appeared as if the Elks were the ones who were distracted as the Bulldogs scored early and often on their way to a 49-0 shellacking of Elkhart.

Crockett opened the contest with possession of the ball at their own 37. A delay of game penalty pushed them back five yards to the 32-yard line. On their first play from scrimmage, however, Bulldog QB Jadyn Collins dropped back to pass, found a wide-open Ty White on a 68-yard bomb and just like that it was 6-0. Antonio Cruz knocked home the extra point and with 11:47 left to play in the first quarter, Crockett led 7-0.

The ensuing kickoff from Cruz resulted in a touchback and the Elks started their first possession of the game at their own 25. The Elkhart offense went nowhere and was forced to punt. On the punt, however, the Bulldogs’ return man muffed the kick and Elkhart’s Randall Walker fell on the ball to set the Elks up at the Crockett 36.

On first down, Elkhart QB Richard Carrillo was sacked for a four-yard loss by Crockett’s Zandric Anderson. An offsides call against the Bulldogs moved the ball to the 35. The Elks were able to get to the 32 but, the Crockett D stiffened and forced Elkhart to turn the ball over on downs.

The Bulldogs went to their ground game on their second play from scrimmage and Keshun Easterling broke free for 22 yards. After an incompletion, Collins connected with White for 16 and on the next play, he found Ja’Lyne Carruthers on a 30-yard scoring strike. The PAT from Cruz was good and with 5:53 left in the opening quarter, Crockett led 14-0.

Elkhart’s next possession ended with a punt. Carruthers had a great return as he got the ball down to the Elks’ 11-yard line. The Elkhart defense kept the Bulldogs in check this time and forced a field goal attempt. In one of the few bright spots on the night for Elkhart, the kick was blocked and the Elks took over at their own 20.

As the second quarter got underway, Crockett’s defense continued to stifle the Elkhart offense. Despite the blocked punt, the Elks went nowhere and were forced to punt.

Crockett took over at their own 36 and three plays later, the Bulldogs were back in the end zone when Collins completed a 13-yard TD pass to Randy Jones. The XP was good and with 9:21 left in the half, Crockett now led 21-0.

Another touchback from Cruz gave Elkhart the ball at the 25. After Walker lost one on first down, Wesley Hubert moved the ball near midfield on runs of four and 17. That was as far as the Elks would get as they were forced to punt, once again.

The Bulldogs opened up shop on their own 15, but quickly moved out to the 30 on a pass interference penalty. A flag on Elkhart was followed by two penalties on Crockett which put the ball on the 27. Easterling managed to pick up the first down on a 15-yard rumble. He followed that up on the next play as he showcased his speed with a 58-yard gallop to make the score 28-0, after the Cruz PAT.

With time running down in the second quarter, the Bulldog defense forced a three-and-out from the Elks, giving the ball back to the offense with just over three minutes left in the half.

On first down from their own 38, Collins and AJ Wallace teamed up for a 25-yard gain, down to the Elkhart 37. After a loss of one, Collins and Jones teamed up for their second TD of the game – this time a 37-yard strike at the 1:41 mark of the quarter. Cruz nailed his fifth extra point to make the score 35-0 and bring the first half scoring to a close.

Things didn’t get any better for the Elks in the second half. A fumble on their first possession of the third quarter gave Crockett the ball at the Elkhart 23. Collins completed a pass to Wallace for eight yards and then Easterling picked up six to set up the Bulldogs with a first-and-goal at the nine. Easterling didn’t waste any time extending the Crockett lead as on the next play, he found the corner of the defense and slipped into the end zone from nine yards out. The extra point was good and with 10:53 left to play in the third quarter, Crockett now led 42-0.

The score remained that way until early in the fourth quarter when backup QB Kevinyun Morning found Angel Walker on 15-yard TD which, after the XP, closed out the scoring and gave Crockett the 49-0 win.

Part One: Simply the Best!
Elkhart Elks Out Lift Competition in Malakoff
Bulldogs Even District Record with Win over Tigers