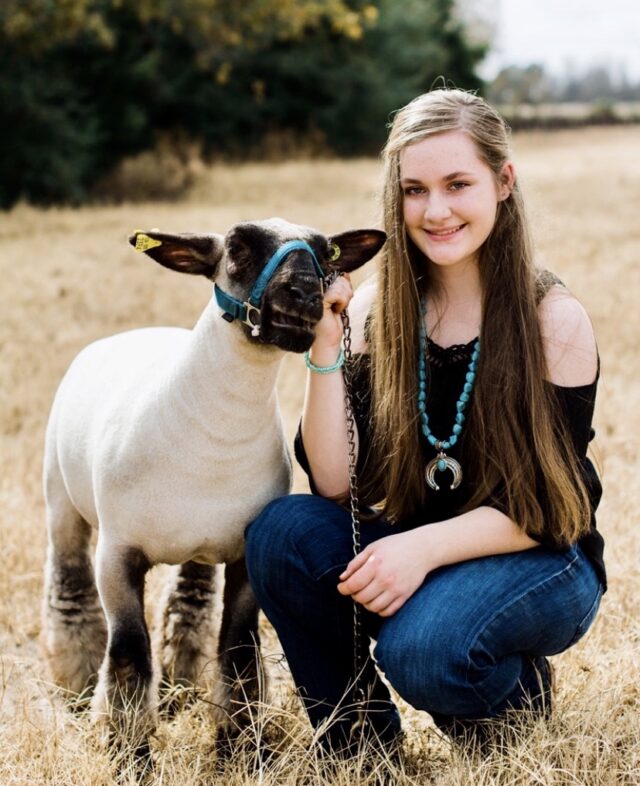 HOUSTON COUNTY – Over the years, the 4-H organization has played a big role in the development of many young students throughout the state of Texas. The purpose of 4-H is the engagement of youth “… to reach their fullest potential while advancing the field of youth development.”

One area 4-H member who is striving to reach her fullest potential is 15-year-old Riley Beaver, the daughter of Greg and Carrie Beaver. Because of the efforts put forward in her club, she was recently selected as a 4-H Livestock Ambassador. Riley is the first person from Houston County tabbed for this prestigious program since its inception.

Earlier this week, Riley spoke to The Messenger about 4-H and her selection as a 4-H Livestock Ambassador.

As the conversation began, Riley was asked to explain what the Texas Youth Livestock Ambassador program was all about.

“The Texas 4-H Livestock Ambassador program strives to provide high school aged 4-H members with the opportunity to develop and practice advanced leadership skills related to mentoring other youth, and to become advocates for animal agriculture,” she said.

Riley went on to say the program was established in 2007 as a way to begin the development of the next generation of advocates for the livestock industry.

President of the Homestead 4-H Club, Riley said her duties as an ambassador included “… mentoring fellow showmen. I love mentoring other youth who share my passion for raising and showing livestock. It’s incredible to be able to help guide a friend on their showing journey and watch as they grew in their knowledge and passion for this industry.”

Another of her duties as a 4-H Livestock Ambassador was to serve as an advocate for the livestock industry.

“I’m very keen on the public speaking side of things. So, when it comes to advocating and educating, I find it very enjoyable to deliver a speech or presentation to a crowd as a way to help expand their knowledge about livestock, in a fun way,” she said.

As to how she heard about the ambassador program, Riley indicated there was no specific instance she could recall but added she started to hear about it at various livestock camps and jackpot shows.

“When I started to get a little older and my passion for the industry grew, I realized the ambassador program would be a perfect way for me to learn more about livestock,” Riley said.

A jackpot show, according to Riley, is like a miniature version of a county fair or major show a person can hone their skills in the show ring.

Her main interest in the show ring is sheep and Riley was asked what led her to the wooly mammals.

“What led me to showing sheep – from the beginning – was we helped a family friend show her sheep throughout her career. By watching her, I decided I wanted to show a lamb because I really liked the lamb she had. It was really fun and so, I started showing lambs. In my first year, I was young and I just liked it. As I got older, I realized I had a passion for the livestock industry and in showing sheep, specifically,” Riley explained.

In her role as an ambassador, Riley was asked if there was any one tip she would give to someone just starting out.

“My biggest pointer for showing any animal either in 4-H or FFA would be that you are never done learning. No matter how much you think you know or how much you do, or how many shows you go to, there is always something new to learn,” she said.

One of her favorite facets of the ambassador program, Riley explained, was this ability to learn.

She added, “From travelling to shows, to meeting other people and learning how to speak with confidence and poise, I don’t know what other program you could get this chance with. Another very intriguing reason to me was the ability to showcase livestock in a good light. I love public speaking and any reason to get out and speak about what I am passionate about, I will find a way to become a part of it.”

Questioned about what she hoped to gain from being a livestock ambassador, Riley said she hoped to “… develop stronger speaking skills, to gain confidence in my ability to mentor other showmen and in myself along the way. I would also like to expand my knowledge in the area of commercial livestock.”

As to what this will allow her to bring to her local 4-H club, Riley said she hoped it would help inspire the members to follow their dreams and to not doubt themselves.

“I also hope to share my newly gained knowledge about different aspects of this industry that they haven’t been exposed to as of yet,” she said.

“The livestock ambassador program is pretty tough to get into,” she continued. “They accept about 75 people per year but this year because of the Coronavirus, they only accepted 55. The short course we attended was all the way out in Amarillo, at West Texas A&M University. It was very intense training and we had college level professors who trained us. We learned a lot of new things and we were exposed to some really awesome stuff. Now that we have this experience, it’s really neat to see other aspects of the livestock industry that I had no idea that existed before.”

To get into the program, Riley said a person should have a lot of experience in the show ring and strong public speaking skills. Passion for the industry is also big part of it.

Riley is home-schooled and will be classified as a sophomore this year.