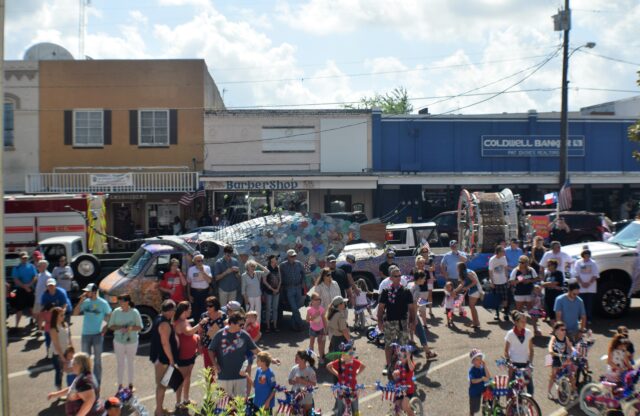 HOUSTON COUNTY – It’s been said that everybody loves a parade, but apparently that news hasn’t reached virus-land as the annual Fourth of July Parade in Crockett has been cancelled this year because of the COVID-19 pandemic.

“With the new regulations that came down from the governor on Friday and with the death in our county, we can’t guarantee people would be six feet apart so the committee (Crockett Downtown Beautification Committee – CDBC) decided to cancel it,” Cathy Minchew said.

Minchew and other members of the CDBC have helped coordinate the parade for the last several years.

“We just decided this today (Monday, June 29). We also heard Salmon Lake Park was cancelling their concert, too,” she said.

MInchew went on to explain any time there are large gatherings of people, it is tough to adhere to the “six-foot apart” guideline. She also said not everyone wears a mask when they’re out in public.

“We hated to do this,” Michew continued, “because this was going to be our twenty-third year. We had all the stuff bought and everything. I guess we will just save it until next year. I think the only thing that hasn’t been cancelled is the boat parade. They can do that because they are way farther than six-feet apart.”

She explained she had sent out a group text to CDBC members on Monday morning and the responses she received indicated it was more important to keep people in the community as safe as possible.

“We sure don’t want people to get sick because they came to a parade. Like I said, we’re just sick about it. We have all the preparations done. In the past we have had 300 to 400 people come to the event. When they announce the winners and have the pie contest, people aren’t going to stay six feet apart,” Minchew said.

Leah Powers, co-owner of Salmon Lake Park with her husband David, said they had cancelled the Freedom Fest part of their Fourth of July Fireworks display.

“With Gov. Abbott’s new executive orders, it limited the number of people to 100 for an outdoor venue. I didn’t have time to look for a loophole so, we just had to cancel,” Powers said.

“People can still come and sit in their cars while we do the fireworks,” she added. “At least I hope that’s okay because we’re still going to do it!”

The fireworks display will be held on Friday evening, July 3 at approximately 9:30 pm.