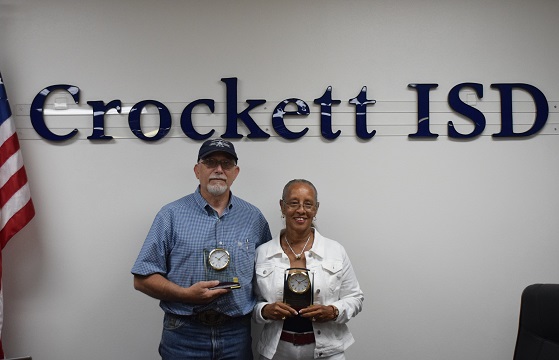 CROCKETT – The Crockett Independent School District said goodbye to a pair of longtime employees and recognized another employee for receiving a prestigious certification during a Crockett ISD Board of Trustees meeting held on Thursday, June 25.

The meeting was called to order by Vice President Karen Norman who asked Board Member Ansel Bradshaw to say a few words about former CISD Administrator Buddy Sumrall who passed away on June 19.

“Buddy Sumrall passed away last week and was laid to rest day before yesterday in Big Sandy. Buddy had a career in education that spanned over 40 years. He started out as a coach then was a teacher and was an administrator for Crockett for a number of years. He retired as a few years ago as superintendent of Grapeland ISD. I would like to take a moment of silence in honor of Mr. Buddy Sumrall,” he said.

Following the moment of silence, the board approved the consent agenda items.

Next, CISD Superintendent John Emerich informed the trustees “… we are going to do a little bit of celebrating. First, I have for you Brenda Bradshaw. Mrs. Bradshaw has just finished her TASBO (Texas Association of School Business Officials) certification.  TASBO is an organization that helps the business side of things in the school world. They put on some of the best training that folks can go to. It is put on by others in the field who have been recognized for the good things they are doing. It is a hands on training. Brenda has now received her certification so we wanted to recognize her for that. It is not something a lot of people wind up getting.”

Once Bradshaw was recognized, the superintendent said the other recognitions were bittersweet.

“We have two people who have dedicated their lives to education with a large portion of that experience here at Crockett ISD. They have both decided to retire. I didn’t tell Richard (Smith) this but if you looked at the two, you would probably think the number went the other way. Richard has 30 years of experience and Mrs. (Delores) Jones has 50 years of experience,” Emerich said with a laugh.

“Both of these individuals have done great things for Crockett ISD and for kids. We wanted to recognize them and present them with a little token of our appreciation. It is well-deserved in every way,” he said.

“Mrs. Jones taught me in her first year at Crockett,” Smith added with a smile.

Following the retirement celebration, the board took action on several items including: