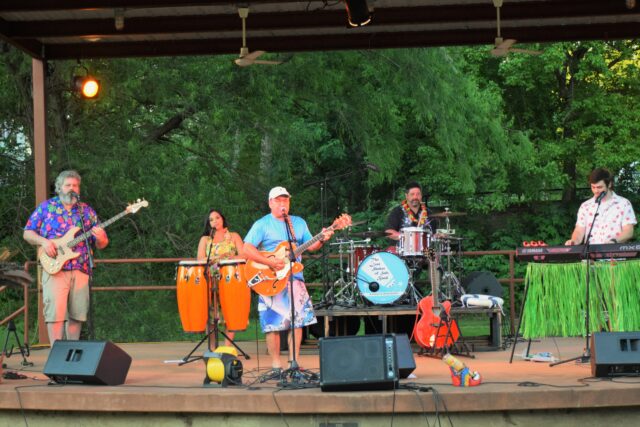 CROCKETT – The 2020 Summer Lightnin’ Series has had a rough year in 2020. First the COVID-19 pandemic put the whole concert series in jeopardy. Then it was announced there would only be two shows – one on June 12 and the other on June 26.

The June 12 Zydeco performance went off without a hitch but unfortunately Wishbone Haze had a scheduling snafu and will not be able to play this Friday night. Fortunately, the Lost Shaker of Salt band was available and has agreed to perform on June 26.

According to the Piney Woods Fine Arts Association, “A little change in plans this Friday June 26. Instead of Wishbone Haze, you will be treated with a musical trip to paradise with the Lost Shaker of Salt Band- a tribute to Jimmy Buffett! Show starts at 8 pm at the Davy Crockett Park.”

The band opened the last year’s Summer Lightnin’ Concert Series and the show was a blast. While it wasn’t the real singer/songwriter, the Lost Shaker of Salt band brought out the Parrot Heads, the beach balls, and all things Buffet. You could almost feel the tropical breeze.

Before their performance last year, lead singer Mark Moss took time to speak with The Messenger about the band.

“We were in a three piece rockabilly band – the bass player, the drummer and myself – when a friend of ours said we should really think about doing a Jimmy Buffett tribute band. We kind of chuckled and said, ‘How are we going to do that?’” Moss said.

Moss said they brought in his wife on congas, a keyboardist “… and all of a sudden we started getting all this interest we had never gotten before with our rockabilly band. It continued to blossom and we continued to have this great response to Jimmy Buffet. Plus, we’re having the time of our lives!”

The band is made up of Robert Renton on bass, Will Renton on keyboards, Lauren Moss on congas and Shane Gormly on drums.

Asked what was inspired a Jimmy Buffet tribute band, Moss said he and his bandmates were always astonished by the amount of fun people seemed to have at a Buffet concert.

“The people let their inhibitions go and have fun. That’s the reason we all decided to be in a band so many years ago. We wanted to have fun and entertain audiences. Sometimes, however, people don’t want to have fun, even if they love you. With the Buffet crowd, it’s a different type of vibe. No one can be mad and listen to ‘Margaritaville,’” he said.

While some tribute bands try and put their own spin or interpretation on the artist(s) they’re paying homage to, Moss said that was not the case with Lost Shaker of Salt.

One of the unique aspects of Jimmy Buffet’s music is the fan base, known as Parrot Heads, who follow the musician from venue to venue.

Moss was asked if Lost Shaker of Salt had developed anything similar.

“There are Buffet fans everywhere we go,” he continued. “They will wear Hawaiian shirts, they will wear flip-flops and they enjoy not only the music, but the experience.  We try and do that. We try and make people laugh, we have a good time and we’re light-hearted. We take the music very seriously but we try and have a good time with the audience. If they leave here and they haven’t had a good time, it’s a failure on our part.”

Social distancing is required but coolers, lawn chairs and tailgating allowed. The PWFAA really appreciated how clean everyone kept the park at the last show.