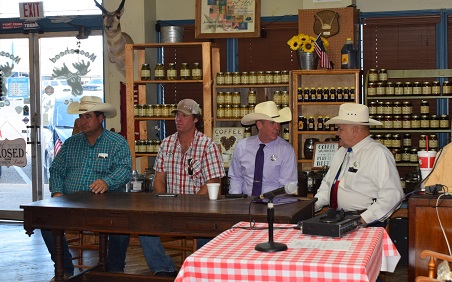 HOUSTON COUNTY – The Republican Party of Houston County hosted a political forum/debate on Thursday evening, June 4 for those candidates who were on the ballot for the July 14 run-off election.

With the retirement of Houston County Sheriff Darrell Bobbitt and the pending retirement of Precinct Three Commissioner Pat Perry, several candidates were vying for their positions during the March 3 primary.

The results of the primary showed the two Houston County races indicated a run-off election would be necessary. Originally scheduled for May 26, the primary was pushed back until July because of the ongoing COVID-19 pandemic.

Thursday night’s forum was held at the Moosehead Café and facilitated by Christian Collins from Congressman Kevin Brady’s office. The event featured the two candidates for sheriff, Randy Hargrove and Ryan Martin, along with the two candidates for the Precinct Three commissioner’s seat Jimmy McMillan and Gene Stokes.

As the forum began, technical difficulties with the sound plagued the opening. The candidates, however, didn’t let that stop them as they were allowed three minutes to introduce themselves to the roughly 100 attendees.

Hargrove went first and said he began his law enforcement career in 1997.

“I started out as a patrolman, worked my way up to patrol sergeant and then to CID (criminal investigation division) sergeant working criminal cases homicides and the like. I will say that when I first started out we didn’t have that many homicides but we do today,” he said.

“Early on in my career,” Hargrove continued, “I decided I wanted to run for sheriff one day. So, I began to prepare for it. I began to study it through coursework and training. I’m excited to be here, to stand here and talk to you and possibly be your next sheriff.”

Martin spoke next and thanked those in attendance for taking time to listen to all the candidates.

“I’m a sergeant at the criminal investigation division of the sheriff’s office. I’ve been at the Houston County Sheriff’s Office since March of 2003. I started out at the jail and from there I went to the police academy. I went to patrol and then there was a period of time from about 2010 until 2014 when I specifically worked narcotics. I then went back to patrol as a night shift supervisor. A couple of years after that, I went back to CID where I currently work,” he said.

Moving from the sheriff candidates to the commissioner candidates, McMillan spoke first.

“I was born and raised in Houston County Precinct Three. I graduated from Lovelady High School and shortly afterwards I started my own business. After that, I got into the dirt business. It gave me a lot of experience in how to manage jobs and it led me to believe I could do a pretty good job as a county commissioner,” he said.

Unfortunately, at this point in the forum, the sound quality took a turn for the worse and the remaining part of McMillan’s introduction was not able to be understood.

Stokes faced the same problem as his opponent when he began to speak and his entire introductory remarks were garbled at best.

Eventually, the audio issues were resolved. Following the candidate introductions, the four office-seekers were asked a variety of questions from the audience.

The questions ran the gamut from a communications breakdown during the time of an emergency to animal control matters.

All four of the candidates stressed fiscal responsibility and working within the county budget. The candidates were also in lock-step when it came to a question about accessibility. All four said they would gladly make their cell phone numbers available to their constituents.

One of the few areas where they differed from one another was in the area of future priorities. Stokes said, if elected, his priorities would be focused on transportation and drainage issues. McMillan said he would seek to make the commissioner’s office more efficient and also concentrate on drainage matters.

Martin explained his priorities as sheriff would be to beef up patrol and to re-institute a narcotics division at the HCSO.  He went on to say he would also focus on child and school safety as well as creating a position for an animal control officer.

Hargrove said one of his priorities would be in constant training in order to keep up with the bad guys. He also stressed the need for a narcotics division but also indicated he was a fan of the Nancy Reagan slogan of “Just Say No.” He went on to say he would like to change the face of the HCSO and show more professionalism.

McMillan indicated he planned to stay active in the private sector with his business while also focusing his energies on the commissioner’s position.