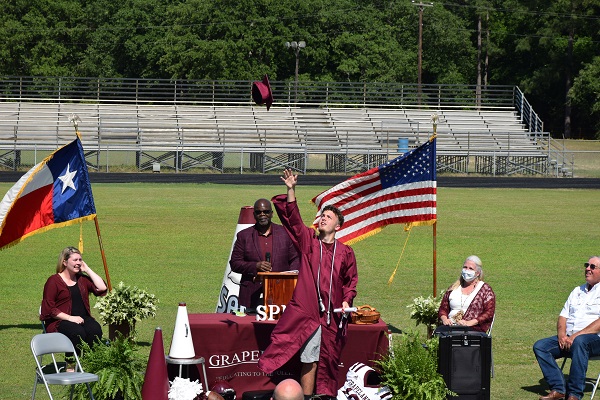 GRAPELAND – Unusual times call for unusual measures. Thanks to COVID-19, graduation ceremonies throughout the nation have been forced to change.

In Texas, the imposition of restrictions as to the number of people who could assemble together and then the easing of said restrictions caused school districts to look for new and creative ways to make sure the Class of 2020 has some type of ceremony.

At Grapeland High School, the senior class came up with a novel approach and during an April 20 GISD Board of Trustees meeting, High School Principal Katie Doughty outlined the process.

“We met with our Senior Class officers to let them give us some insight on what they wanted to do. They proposed to us – and we have pieced it together from other districts – that we want to use what would have been the very last week of school to plan individual graduation ceremonies,” she said.

Doughty indicated each senior would be allowed to pick one of six locations. These were: the front of the high school; basketball gym; front of the Ag building; football field; baseball field; or the softball field.

On Tuesday, May 19 the conferring of diplomas to the GHS Class of 2020 started with a 4 pm kick-off at Sandie Stadium. Those who received their diplomas on Tuesday were: Cooper Ward; Carmen Page; Chanellor Francis; Hannah Lucas; Aaliyah Coleman; Dalton Donaldson; Kaden Dupree; Haylee Cryer; and Keoria Shepherd.

The Friday, May 22 graduation was held in front of the Ag. Building and started at 4 pm. The graduates scheduled to receive their diplomas were: Conner Jordan; Spencer Martin; Alyssa Dilli; Ethan Harrison; Cayden LeBlanc; Jayden Rodemaker; and Justin Odell.

The conferring of diplomas wraps up on Wednesday, May 27 at the football field, beginning at 4:30 pm. Those scheduled to receive their diplomas are Keaundra Harris and Brooke Steubing.