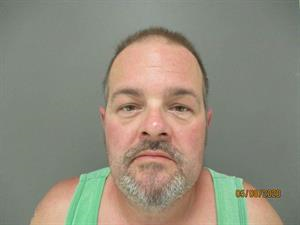 KENNARD – A Kennard man is behind bars after it was alleged he had repeatedly assaulted a relative while living in said relative’s home.

Tracey Devin Callaway, 46, was taken into custody on May 7 and charged with injury to a child, elderly individual or a disabled individual, stemming from his actions on April 25.

In an affidavit of probable cause it was stated the Houston County Sheriff’s Office (HCSO) was contacted by the victim on April 27 about his need to file criminal charges against Callaway for an assault that occurred on April 25.

The next day HCSO Sgt. Larenzo Simpson spoke with the victim who informed the Sgt. Simpson he would like to have an emergency protective order issued against Callaway.

The victim informed the law enforcement official that Callaway threw him to the floor on April 25, got on top of him, punched him in the face and choked him.

“(The victim) stated that he was hurt very badly and in fear for his life from Tracey while being assaulted. (The victim) stated it hurt and caused him such pain that he had to go to the emergency room in Lufkin for treatment,” the affidavit indicated.

He provided a copy of the medical report he received while in Lufkin to Simpson which confirmed the injuries the victim described.

It was further learned that Callaway had assaulted the victim several times before, according to the probable cause document.

“(The victim) gave an affidavit in request for a protective order against Tracey and stated that Tracey would throw him to the floor during the assaults and would stand over him, telling (the victim) not to tell anyone or he’d put him back on the floor,” the legal document stated.

Callaway was taken into custody on Thursday, May 7 and charged with injury to a child, elderly individual or a disabled individual – a second degree felony.

Callaway is being held in the Houston County Jail on bonds totaling $20,000.