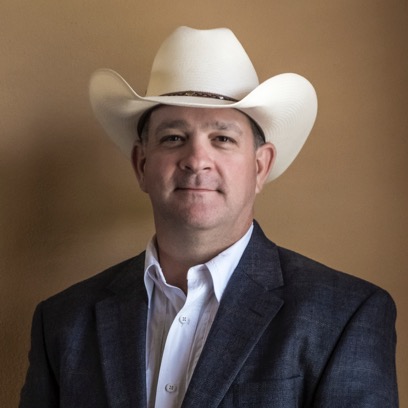 HOUSTON COUNTY – To say these are unusual times would be an understatement. The COVID-19 pandemic has affected many aspects of our daily lives. For example, Friday, April 3 would have been the Sale of Champions for the Houston County Fair and Youth Livestock Show.

Unfortunately, the 2020 edition of the Houston County Fair was cancelled due to the Coronavirus. The cancellation left many young exhibitors high and dry with no way to recover the time, effort or money they had put into their animals.

Fortunately, the Houston County Fair Association (HCFA) came up with a plan to hold an online auction as a way to help the exhibitors re-coup some of their investment. Now, all they needed was an auctioneer and in stepped Trinity County Sheriff Woody Wallace.

Prior to the Friday evening auction, Sheriff Wallace spoke about how he got into the auctioneering field and his hopes for success in Houston County.

“It’s a funny story about how I got into this,” he said. “I had always wanted to do auctions. When I became sheriff, I went to the new sheriff’s school and there was a retiring sheriff there named JB Smith, out of Tyler.”

The sheriff said Smith told the group of new sheriff’s how he conducted all of his county’s tax seizure sales. He said he went to the auctioneering school and got his license to make sure he would be the one on the courthouse steps doing the sales.

“I thought to myself that was a good idea. I wanted to be an auctioneer one day so I thought I would do the same thing. I did that and now I do all the tax sales in Trinity County. Then, we also do our seizure sales from where we seize he property from all the drug dealers. It saves the county about 20 percent because every time we would do a sale, we had to give the auction company that 20 percent,” Wallace explained.

“Now that I’m getting a little older,” he continued, “and this job doesn’t pay what I’m used to making, we started an auction company on the side. We started an on-line platform a couple of months ago and when this all happened (COVID-19 outbreak), here in Trinity County, whenever they said they wouldn’t be able to sell these animals for the kids, I said ‘Hey! I’ve got an idea. Let’s sell them on-line. It hasn’t been done before but let’s do it.’”

Initially, Wallace said the idea was met with some skepticism but eventually the folks in charge of the Trinity County Fair began to warm up to the idea.

“They decided, what do we have to lose? We ended up doing more in Trinity County than they had ever done in the past, as far as price on animals. It turned out really good and hopefully we’ll do the same thing tonight in Houston County,” Wallace said.

The sheriff added he had been contacted by quite a few people after word got out about the Trinity auction and had landed contracts with Walker County, as well as the Cleveland livestock show.

Changing gears somewhat, Wallace was asked what it takes to become an auctioneer.

He replied, “A lot of practice! First and foremost, when you go to auctioneering school, they teach you the law. There are a lot of laws involved with being an auctioneer and how you advertise, call bids and how you run an auction company. You have to learn that first and then they start you out with a bunch of nursery rhymes to loosen your lips up a little bit.”

You practice the rhymes until you develop a rhythm and then you begin to develop your own chant, he explained.

“Some auctioneers are loud and hard to understand and some are slower and you can actually understand them. I’m one of those who wants to be clear and have you understand every word I’m saying,” Wallace said.

The online company used for the Houston County auction is called Wal-Lee Auction Company and according to Wallace “… they have a jam-up program that is very user friendly. It’s set up for tractors and other kinds of auctions but we called them and said we’re going to do this as a charity event for these kids. They worked with us really well.”

As far as numbers go in Houston County, Wallace said he was aware a lot of kids did not put their animals in the auction because they either wanted to keep the animal themselves or they were afraid they would lose money.

“There’s a little apprehension, because it’s new,” he explained. “It seems like y’all have usually brought in around $300,000 or so. Hopefully, we can stick with the pricing they normally get and hopefully the animals will average about the same. Now, you’re not going to have a grand prize steer so you won’t have that one steer that stands out with a lot of money. Hopefully, those people who normally bid on that steer will throw their money in with the others so these kids can maybe get their money back.”

Before wrapping up the conversation, the sheriff gave special recognition to HCFA Secretary Beverly Moore.

“She really stepped up and got this thing together on her end. They got us all the information we needed and she really deserves a pat on the back because she did a great job,” he said.