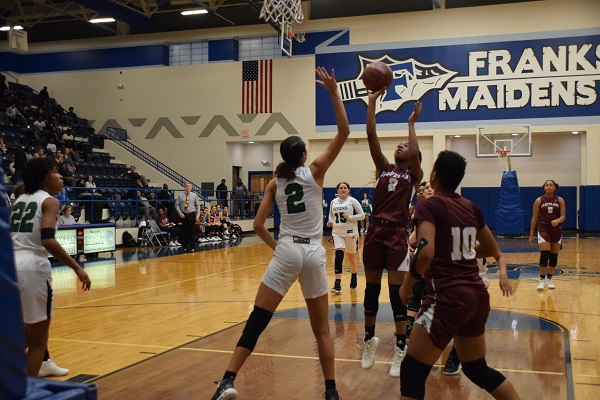 FRANKSTON – No one said the road to San Antonio would be easy. After winning Bi-District and Area by an average of 40 points, the Grapeland Sandiettes faced their first real test of the season as they took on the Kerens Lady Bobcats in the Regional Quarterfinals.

Grapeland came into the game ranked #4 with a 31-5 record while Kerens entered the contest ranked #19 with a 28-8 mark. For most of the game, it appeared as if the rankings should have been reversed, but in the end the Sandiettes’ speed and defense were simply too much for the Lady Bobcats to handle as Grapeland pulled away in the final minutes to win by a score of 72-62.

As the game got underway, the tone was set for Kerens as the Lady Bobcats fed the ball to Kecie Langley, time-after-time. Langley responded with 12 points in the first quarter while Alexis McAdams added five.

The Sandiettes had an answer for Langley and that was All-State forward Teira Jones who dropped in 11 while Kenya Woods poured in nine to help Grapeland take a 20-17 lead after the first eight minutes of play.

In the second quarter, the Grapeland defense began to frustrate Kerens as the Sandiettes opened up an eight point lead midway through the period. The Lady Bobcats fought back, however, and tied the game at 33 with 1:25 left in the first half. Kerens would eventually take the lead and went into the locker room at halftime leading 36-34.

Langley continued to give the Sandiettes fits in the paint as she netted 11 points in the second. Reece Wright dropped in six while McAdams added a basket to round out the Lady Bobcats first half scoring.

KeKe Harris paced Grapeland in the quarter with seven points while Jones was saddled with three fouls and only had four. Jessie Payne also got in on the act as she drained a shot from behind the arc to account for the Sandiettes first half point production.

Despite being down at the half, Grapeland came out for the third quarter and they looked loose. The girls were laughing and smiling on the bench when the quarter began.

The smiles soon faded, however, as the Lady Bobcats opened up a seven point lead by the 5:36 mark of the third and then pushed it to 10 with 2:48 remaining in the period.

That was when Harris took over the game. She hit a three, snagged a pair of rebounds and made two clean steals within the span of a minute. In less than a minute, the Sandiettes only trailed by two. Grapeland eventually tied the game at 48 before Kerens took a 50-48 lead after three periods of play.

Langley netted another 11 for Kerens in the third while Wright hit a three to close out the Lady Bobcats scoring in the third.

Harris paced the Sandiettes with seven while Payne hit from downtown. Jones and Woods both chipped in two.

When the fourth quarter began, Grapeland came out on fire. The Sandiettes took the lead at the six minute mark and a three-point play from Jones gave Grapeland a 57-52 lead with 5:30 remaining in the game.

Tatiyana Bowie pushed the Sandiettes’ lead to seven with 3:53 left to play but the Lady Bobcats battled back to trim Grapeland’s lead to three.

With 3:04 remaining, Woods connected from behind the arc to give the Sandiettes a little breathing room. After that, the defense clamped down and only allowed Kerens to score two points over the game’s last three minutes.

After milking the clock for over a minute, Payne broke free for an uncontested lay-up. Then, Harris Iced the game with a pair of free throws to give the Sandiettes the 72-62 win and punch Grapeland’s ticket to the Regional Tournament in Bryan.

On the game, Kerens was led by Kecie Langley with a game-high 40 points. Alexius McAdams dropped in 11 and Reece Wright had nine. Kaylee Reed closed on the Lady Bobcats’ scoring with two points.

The Sandiettes were paced by Teira Jones with 26 points. KeKe Harris and Kenya Woods both dropped in 18 while Jessie Payne added eight and Tatiyana Bowie had two. 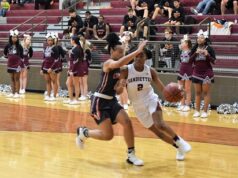 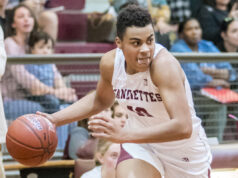