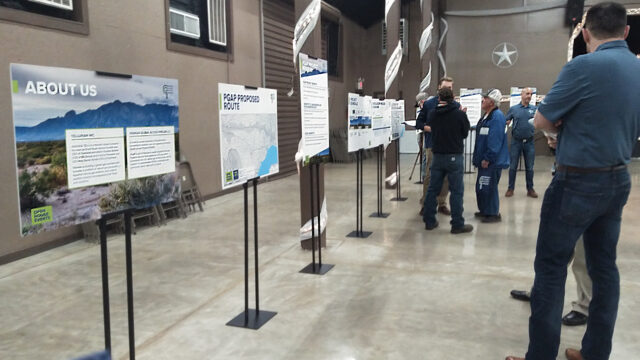 LOVELADY – During an Open House event hosted by Tellurian, a Houston-based global gas business) held on Thursday, Feb. 19 at the Lovelady Community Center, residents were welcomed to an informal gathering where their input as property owners was sought.

The event was hosted for all land owners within one-fourth-mile radius of the proposed route of the Permian Global Access Pipeline (PGAP). PGAG is an approximately 625-mile long, 42-inch diameter interstate pipeline of natural gas originating at the Waha Hub in the Permian shale basin near Midland, Texas and terminating into an existing pipeline infrastructure located near Lake Charles, La.

Tellurian was founded by Charif Souki (former founder and CEO of Cheniere) and is led by President and CEO Meg Gentle (former CFO of Cheniere). The company is building a global gas business that includes a portfolio of natural gas production a liquefied natural gas terminal, and a robust pipeline network encompassing both Texas and Louisiana.

Upon arrival, residents were asked to sign in and verify their property information with the company’s database. After verification, guests had the option to speak to the Tellurian representatives about the project or make their way to the aerial map display to discuss any unforeseen issues with the proposed route.

“Tellurian is hosting open houses all along the pipeline route to introduce the PGAP project, including the timeline and proposed route, to landowners and community stakeholders.  It is also the first of many opportunities for the public to provide feedback, ask questions and share any concerns they might have,” Jason French, Tellurian Vice President of Government and Public Affairs, said.

“The PGAP team is committed to engaging the public early and often and looks forward to working with all stakeholders as this project moves forward.” French continued.

There are currently three different proposed routes for the PGAP. Of the three routes, only one would only run through Lovelady in the Houston County area. The two other alternative routes would not affect any land owners within Houston County.

Jordan Bridges may be contacted via email at jbridges@messenger-news.com.