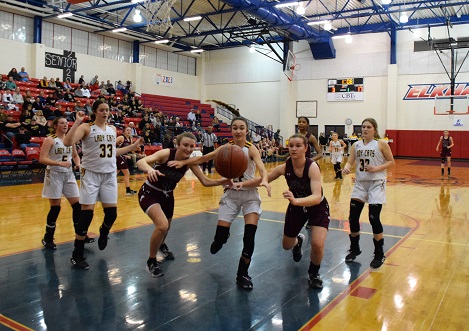 ELKHART – The Lovelady Lady Lions opened their 2020 playoff run against the Cayuga Lady Cats on Tuesday night in Elkhart.

Lovelady came into the Bi-District matchup as the third place team out of District 20-2A while Cayuga was the runner-up in in District 19-2A.

The Lady Lions have steadily improved all year as some of the younger players have developed and the team has started to gel into a cohesive unit. That cohesion was on display Tuesday evening as Lovelady raced out to a double-digit lead, withstood a Cayuga charge and then waltzed to a comfortable 61-37 win.

The Lady Cats started out ice-cold from the field as the only made one shot in the first eight minutes of play – a three-pointer from Reagan Clarke.

Meanwhile, the Lady Lions opened the game on fire as they dropped in 19 points. Kaiden LeMaire and Shyanne Pipkin both netted five points while Rajanae Polhamus had four. Kameron Negrete hit from downtown and Baylee Granberry chipped in two to help give Lovelady a 16 point lead after one.

As the second quarter got underway, so did the Cayuga offense. The Lady Cats netted nine but missed a golden opportunity to get back within striking distance as they only converted two of eight from the line. Briley Shaw put in five while Savannah Fitzgerald and Aerin Thompson added two apiece.

Pipkin continued to pace the Lady Lions as she dropped in four points while LeMaire had three. Both Polhamus and Madelyn James chipped in two apiece to help Lovelady take a 30-12 lead into the locker room at halftime.

Following the break, the Lady Lions began to struggle from the field. Pipkin kept the Lovelady offense going with five points while Granberry netted two, but that was it for the quarter.

Cayuga used the three-ball to try and get back in the contest. They managed to whittle the Lady Lions’ lead down to 15 on a pair of threes from Shaw and a three-pointer from Clarke. Fitzgerald made one of two from the line to make the score 37-22 after three periods of play.

In the fourth quarter, the Lady Cats began to mount a comeback and cut the lead to 10 as they came out and scored the first five points in the quarter.

That was as close as Cayuga would get. The Lady Lions began to feed the ball to Granberry down low and the senior responded with 11 points. LeMaire and Polhamus added four apiece while Pipkin had three and Negrete added a basket to help the Lady Lions pull away for the 61-37 win.

On the game, Cayuga was led by Briley Shaw with 16 points. Reagan Clarke dropped in nine, Savannah Fitzgerald canned five, Mackenzie La Gard had four and Aerin Thompson had three to close out the Lady Cats’ scoring.

The Lady Lions were paced by Shyanne Pipkin with 17 points while Baylee Granberry had 15. Kaiden LeMaire netted 12 and Rajanae Polhammus was also in double figures with 10. Closing out the Lovelady point production, Kameron Negrete had five and Madelyn James chipped two.

The Bi-District champs will now move on to the Area Round of the playoffs where they will face the #13 ranked Lady Bulldogs from Marlin. The game will be held at Leon High School in Jewett with a scheduled 7 pm tip-off.