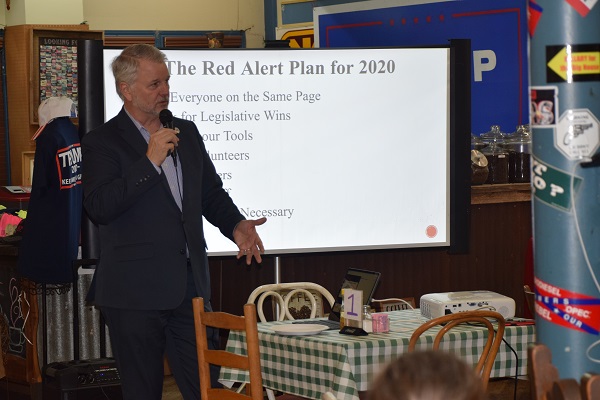 Dickey was on hand for a presentation entitled “Red Alert Texas.”

“My presentation is called Red Alert Texas because that’s the attitude I want everybody to have. That’s the sense of urgency as I have traveled across the state of Texas that I want to make sure people have,” he said.

“There is no bigger mission or challenge in politics, right now,” he continued, “or no more important thing than making sure we defend Texas.”

The GOP Chair said he had been in Texas for over 30 years and had seen the state turn from blue to red as Republicans seized control from the Democrats.

“The Democrats are hungry and they want to flip the state just as badly as we did 30 years ago. In 2018, despite their best efforts, we won every statewide office for the 12th election in a row. We are the only state in the country where Republicans whip on Democrats that much. But there were several warning signs,” Dickey explained.

He cautioned the GOP had lost two of 21 State Senate seats up for election, along with 12 of 95 State House seats and needed to shore up the GOP majorities in Austin.

Dickey added one of the keys to retaining the GOP majority was to make sure the party’s base turned out to vote in the Nov. 2020 election.

Prior to Dickey’s presentation, Kirk Osborn – a GOP candidate for Congress – addressed the crowd and said he was hoping to unseat Congressman Kevin Brady as the 8th Congressional District’s representative in Washington, D.C.

Osborn said the reason he was running against Brady was because Brady was a RINO – Republican in Name Only.

His platform includes: building a wall along the southern border of the United States; repealing Obamacare; “draining the swamp;” supporting the second Amendment; balancing the budget; and fighting for the right-to-life

Osborn aligned himself with Rep. Jim Jordan (R-Ohio) as well as the Freedom Caucus and said when Jordan staged his protest against impeachment hearings, his opponent was nowhere to be found.

“Would you like to have a congressman who votes in a conservative manner as you do? We are the fourth most conservative district in the United States of America, District 8 – here in Texas. That’s number four out of 435,” he said.

The candidate continued and said if voters were to research the website www.conservativereview.com, it would show Congressmen Trey Gowdy, Louie Gohmert and Jim Jordan all had acceptable scores on the last 50 important votes at over 90 percent.

“Our guy (Brady), 38 (actually 40) percent. He votes closer to Sheila Jackson Lee on immigration than any of the others you may admire,” Osborn said.