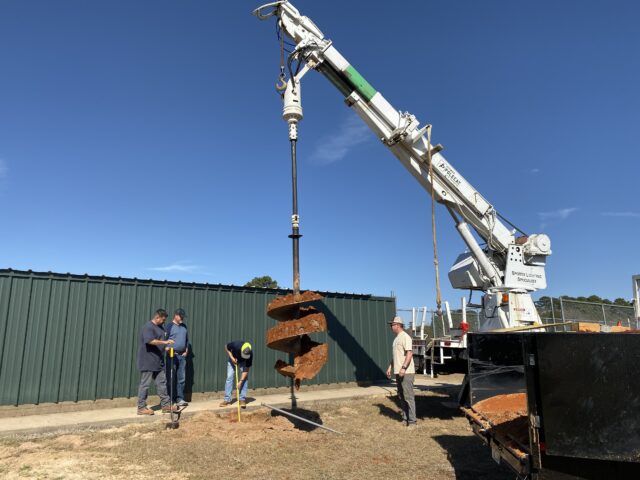 LATEXO – The Latexo ISD Board of Trustees held their regular November board meeting last Thursday, Nov. 14.  A topic that always seems to come up in discussions about Latexo ISD is “When are the baseball and softball fields going to be lighted?”  During any function that you are at, you can surely come across that conversation and that was exactly the conversation that night.

A representative from Techline Sports Lighting, LLC (Mark Reynolds) came to speak to the board about LED Sport lighting and give a proposal to light the baseball and softball fields.

Reynolds explained his proposal and answered several questions.  The main points that he cited as advantages for moving forward with the project were:

• Currently students must get out of school early to participate in baseball and softball games.  The games must start at 3:45 p.m. and sometimes earlier to be able to finish before dark.  The point was also made that even then, games would have to be called due to darkness.  This was also a problem for the parents that worked and could not get off to see their children play.

• Not having lights also posed a problem for the coaching staff in scheduling games.  It is difficult to talk other coaches into playing non-district games at a field with no lights.  Which usually resulted in a lopsided amount of away games in the non-district schedule.

• New technology using LED lighting not only has come down in pricing but also offers great advantages over (bulb type) lights of the past such as when the light switch is turned on it is immediate, LED uses one-third less power, and Techline Sports also offers a 10-year warranty with the lights and will be maintenance free for 10 years.

• The project will be completely installed by a local contractor (East Texas Safe-T Lighting).

After listening to his proposal, the board questioned the ability to pay for the lights.  The proposal also included a finance option that would allow the district to defer the payments for the first year and spread the $298,000 price tag over a 5-year note at 3% interest.

District Business Manager Jo Lane said that she could work with that number and fit it into the upcoming budgets.  When questioned by board member Willie Patton if she could have fit it into this years budget, Lane said, “Yes, if we need to. I feel like it could have been done.”  Superintendent Michael Woodard added that he was comfortable with the ability to spread the note out on a rate of 3%.

In further discussion over the project, board member Dr. Michael Allen made a point of asking about lighting that could be directed into the Elementary playground area and parking lot from the back side of the poles to provide for children during games at night and safety in the parking lot.  Reynolds agreed to add this to the proposal at no charge.

At this point board member Chris Morris made the motion to accept the proposal made by Techline Sports Lighting and was seconded by Board Member Jeffery Catoe.  It was also added by board president Kelly Nicol that the board accept the 5-year note option.  The Board voted 6-0 and the motion passed.

In other items on the agenda:

• Approval of Financial Audit was passed.