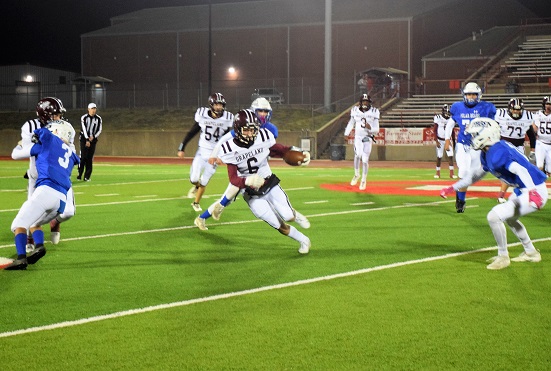 Sandies Move to Area Round

GROESBECK – With temperatures in the high 30s at kickoff, it seemed appropriate the Grapeland Sandies would open the postseason with a game against the Frost Polar Bears.

Based on the two teams’ records, the game went about as expected as the Sandies blasted the Polar Bears by a final of 63-14 to win the Bi-District Championship.

Grapeland scored early and they scored often. The Sandies won the toss and elected to receive. Starting at their own 45 Keizion Ashford picked up six on first down and following an incompletion from Grapeland QB BJ Lamb, Cadarian Wiley picked up enough for the first down.

A holding call against the Sandies moved the ball back into their own end of the field, but on first and 20 from their own 45, Lamb found a wide-open Deco Bryant for a 55-yard scoring strike at the 10:17 mark of the first quarter.

On the try for two, Lamb hooked up with Justin Bobbitt to make the score 8-0 with less than two minutes gone in the game.

Following a three-and-out from the Polar Bears, the Sandies took over at their own 20 and began to move the ball.

Grapeland moved out to midfield but on second and five, Lamb hit Bobbitt for 10 yards. As Bobbitt was fighting for extra yardage, the ball popped free and the Polar Bears recovered at their own 35.

After an initial first down, the Grapeland defense stiffened and forced a punt. The Sandies took over at their own 14 and then a crazy play happened.

Lamb dropped back to pass on first down and saw Ashford cutting across the middle of the field. He hit Ashford in stride and he turned up field. At the 50, a Frost defender knocked the ball loose but a perfect bounce came right back to Ashford who took it the rest of the way to pay dirt for an 86-yard TD. Wiley converted the try for two and with 5:18 left in the first, the Sandies now led 16-0.

The Polar Bears could not get anything going on their next possession as the Grapeland defense forced Frost into a fourth and 15 from their own 23.

Frost elected to punt but kicked it to the wrong guy as Lamb fielded the ball at his own 35, made the first man miss and then followed his blockers to the end zone for an apparent touchdown.

The play was called back, however, because of a penalty but after two big runs by Wiley moved the ball inside the Frost five-yard line, Ashford took it the rest of the way for his second TD of the night. Lamb connected with Bryant on the try for two and with 3:03 left in the first quarter, the Sandies now led 24-0.

The Polar Bears next possession began at their own 25, but on the next play from scrimmage, Frost QB Antoni Alvarado was picked off by Bryant at the 40. Bryant worked his way down the sideline before being pushed out of bounds at the five.

Two plays later, Cooper Ward bulled his way into the end zone from a yard out to give Grapeland a 30- point lead. Lamb knocked home the PAT, and with 2:11 still left in the first quarter, the Sandies now led 31-0.

As the first quarter came to an end, Frost had possession and seemed to finally get their offense going. Starting at their own 38, Alvarado connected with Ramon Manriquez for a yard and then found Preston Rasco for 20.

With the ball now in Grapeland territory, Alvarado connected with Korben Bowling for 22 yards more. The Polar Bears worked the ball inside the Grapeland red zone and after a Manriquez seven-yard gain, Alvarado took it the rest of the way to make the score 31-7, after the PAT.

Grapeland didn’t waste any time in reclaiming their 30-point lead. Starting at their own 25, on the first play from scrimmage after the kickoff, Lamb hit Ashford with a 75-yard bomb to make the score 37-7 with 9:35 left in the half.

The Polar Bears’ offense continued to click on their next offensive possession as Alvarado guided his team down the field. On a fourth-and-five from the Sandies’ 16, the Frost QB found Rasco in the end zone for six points. The extra point by Manriquez was good and with 4:51 left in the half, Frost now trailed 37-14.

Once again, the Sandies struck back. Grapeland had the ball at their own 25 to start their next possession. Wiley picked up two on first down and then Lamb hit Ward for 13 to move the ball out to the 40.

On the next play, Lamb connected with Bryant for a 50-yard completion down to the 10. Bobbitt took the ball the rest of the way and with 2:33 left in the half, Grapeland now led 43-14.

Frost attempted to get something going before the break but after QB sacks by Cooper Sheridan and Kaden Dupree, Alvarado was picked off by Ward to close out the first half, with Grapeland in the lead 43-14.

The second half began the same way the first half ended as Ward intercepted his second pass of the game and returned it to the Frost 36. From there, Lamb found Ashford on a 36-yard TD reception to make the score 49-14 with 10:20 left in the third quarter.

After the two teams exchanged possessions, Grapeland took over at their own 22 and it didn’t take long for the Sandies to find the end zone, once again. On first down, Wiley took the handoff from Lamb and burst up the middle.

He powered through a tackle, kept his balance on an attempted shoe-string tackle and raced 78 yards to pay dirt to make the score 56-14, after the extra point.

The Sandies added a late touchdown following a turnover to make the final score 63-14. Grapeland will play the winner of the Cumby Trojans vs. Bowie Pirates game. The date, time and place have not been determined as of yet.