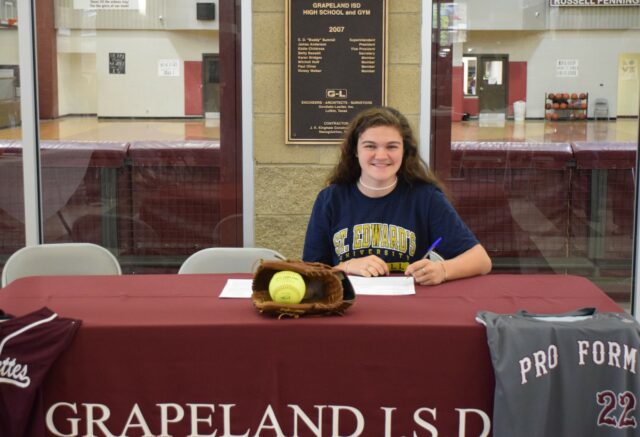 GRAPELAND – The batter settles into the batter’s box. She can hear the pitch cutting through the air – tthhwap – as it settles into the catcher’s mitt. “Sttriiike Three!” the umpire exclaims, as the batter stands motionless before turning and walking slowly walk back to the dugout.

This scene has played out hundreds of times over the last three years when Cadie Belle Currie has been in the pitching circle for the Grapeland Sandiettes. She has collected numerous awards including being named First Team All-State – twice. In addition, she has pitched the Sandiettes to a pair of district championships and to the Regionals Finals in 2018.

Several universities came calling, looking to woo the southpaw away from her verbal commitment to St. Edward’s University. On Wednesday morning, Nov. 13, however, Cadie Belle removed all doubt as she signed her National Letter of Intent to pitch for the Hilltoppers.

At the conclusion of the reception in her honor and once all the pictures had been taken, Cadie Belle spoke to The Messenger about her decision to play softball for St. Edwards.

She explained while playing for a team called Texas Elite, one of the team’s coaches was affiliated with St. Edward’s University. He suggested she look at becoming a Hilltopper.

“He told me saw a lot of potential in me and directed me towards St. Edward’s. His daughter is a pitcher there and she took an interest in me and has helped me to become a better pitcher,” Cadie Belle said.

St. Edward’s is no stranger to Grapeland as former Sandiette Baylee Lumbreraz signed to pitch for the Hilltoppers a few years back.

Cadie Belle said she had been told she “… was going to one of the starting pitchers. They’re counting on me to continue to work hard, not slack off and be ready to go when I get there.”

When asked what she planned to study at St. Edward’s, Cadie Belle said she would like to pursue a degree in the forensic sciences.

As the conversation continued, the soon-to-be Hilltopper was asked to describe what a typical day would be like once she arrives on campus.

Questioned about any advice she would give to younger teammates, Cadie Belle said, “Keep working hard and always reach for the stars. The sky is not even the limit! Whenever you put your heart into it, you can do whatever you want to.”

With the 2020 UIL Softball season just around the corner, Cadie Belle was asked about the team’s chances this year.

“Every year, we had planned on going to state and winning it, of course,” she said. “I think we have a really good chance of winning it this year. We’re more experienced and we have almost all of our starters back. I think we will have a pretty good chance of getting at least as far as we did my sophomore year.”

During that season, the 2017-2018 Sandiettes made it to the Regional Finals where they fell to the Woden Lady Eagles, 3-2.

She also made sure to express her appreciation to all those who were involved in helping her to get the scholarship offer.