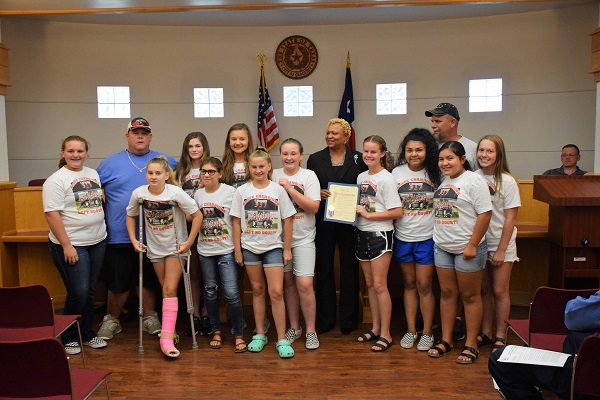 CROCKETT – It is tax time for governmental entities and while this brings a frown to the faces of taxpayers as taxes inevitably go up, residents in the city of Crockett can breathe a sigh of relief as the city council voted Monday Aug. 5 to keep the same tax rate in Fiscal Year (FY) 2020 as in FY 2019.

“As we move forward with the budget as it was presented in the budget workshop, there is no tax rate increase, no water rate increase and no sewer rate increase. There is an SSO (sanitary sewer operations) fee increase from $1.06 to $3.80, but there are no rate increases or tax increase,” City Administrator John Angerstein informed the Crockett City Council.

“We have our certified values from the appraisal district which has allowed us to complete our projected revenues for FY 2020,” he said.

Following a brief discussion, the council unanimously approved the FY 2020 proposed tax rate of 0.596791 per $100 of property valuation, the same as the FY 2019 tax rate.

Prior to the tax discussion, Crockett Mayor Dr. Ianthia Fisher requested Richard Omelina, the coach of the Crockett Fireballs Texas Teen Age Softball 12U State Champions, to join her at the front of the city council chambers as she read a proclamation declaring Aug. 5, 2019 as “Crockett Fireballs Team Day.”

“I hereby commend the members of the Fireballs softball team for their hard work, team effort and excellent performance which achieved a state championship with an undefeated season record of 20-0,” the mayor said.

Also on hand for the proclamation was State Rep. Trent Ashby (R-Lufkin) who presented each of the team members with a resolution from the State of Texas.

The resolution stated in part, “Be it resolved the Crockett Fireballs should be congratulated on winning the 2019 Texas Teen Age Softball Association 12U State Championship and the team be extended sincere best wishes for continued success.”