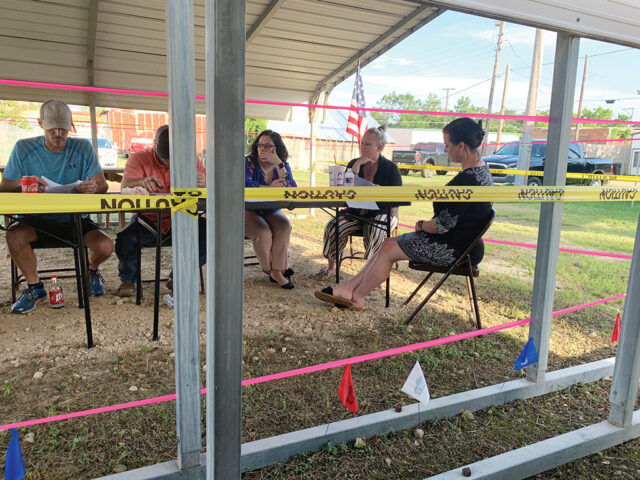 ELKHART- Peculiar has been a word that has popped up over the last few weeks when the City of Elkhart has been the topic of discussion. That was no exception as the regular July meeting of the Elkhart City Council came to order on Monday, July 1 at 6 p.m.

Due to seating restrictions at city hall, the venue was moved outside behind city hall in a field to a portable carport that was wrapped in caution tape.

When asked after the meeting why the tape was wrapped around the council’s carport/meeting area, Mayor Jennifer McCoy stated “I did it under the advisement of the (Anderson County) sheriff’s deputy. People are encroaching on our space.”

In all fairness to the members of the crowd, there were no disturbances caused and all attendants remained calm without any exceptions.

The first order of business for the council was to go into executive session and consult with council via telephone to receive legal advice concerning contemplated legal advice and status thereof.

After 50 minutes, the council returned from city hall and reconvened back into regular session and took action regarding “threatened litigation” concerning severance pay for former city secretary Carla Sheridan.

The motion was seconded and passed unanimously.

In an interview on Thursday, June 27 with City Administrator Judith Cantrell, The Messenger asked if the city was going to pay Mrs. Sheridan.

Mrs. Cantrell responded “Yes, we are going to pay her.”

In an interview after the July 1 meeting, the mayor was questioned about Mrs. Cantrell’s statement.

“She had no knowledge until we were in executive session on the phone with the attorney that we hired at our last special called meeting … Betty Glenn from Fort Worth. She was able to review all the information and review the contract and give her findings this evening and the Council decided to go on with their decision,” Mrs. McCoy told The Messenger.

The mayor stated the attorney’s fees were $275 per hour for Glenn and $75 per hour for her legal aide. When asked if they gave a projected cost if this was to go to court, the mayor replied “No, right?” and referred to Mrs. Cantrell.

Mrs. Cantrell said “No projection was given. If a lawsuit was filed, we would go to TML (Texas Municipal League) and see if our TML insurance would cover that because we do pay to be insured for an instance that we are sued. There is an off-chance that they wouldn’t cover us and if they don’t, we would have to regroup there. But hopefully it doesn’t come to that.”

The Messenger was able to contact Chris Sheridan (husband of former City Secretary Carla Sheridan) and asked if they intended to pursue any legal action.

“I’m unsure of what we will do at this time but we are not surprised by the action of the council,” Mr. Sheridan said.

The next item up for discussion was action, if any, on ordinances presented by the City Administrator establishing a code of decorum during all city meetings, which the council previously requested be drafted during the meeting of April 15.

Cantrell rose to address the council.

“During the last meeting there were rules referred to as being a verbal recording into the minutes of a prior meeting… that required sitting in the gallery for safety per the Fire Marshall,” Cantrell said. “I went back and looked for the minutes and since I wasn’t here then and I did see it was verbally established, however, it was never memorialized into a formal set of rules, so I went ahead and contacted other city officials around the state that I have networked with and have received some different rules that have worked throughout the state and I will read the ordinance that will establish rules of order for future meetings.”

Mrs. Cantrell went on to read the ordinance, including these points:

1. Unless addressing the City Council or entering or leaving the Council Chambers or other meeting place, all persons in the audience shall remain seated in the seats provided. No person shall stand or sit in the aisles along the wall unless permitted by the mayor. No person shall block any doorways.

2. All demonstrations including cheering, yelling, whistling, clapping or foot stomping which disrupts, disturbs, or otherwise impedes the orderly conduct of the council meeting are prohibited.

3. No placards, signs, posters, packages, bundles, suitcases or other large objects shall be brought into the council’s chambers or other meeting place except with the prior authorization of the mayor.

4. Smoking is prohibited in the council chambers or other meeting place.

5. Members of the public may address the city council at the following times during the meeting:

A. During citizen comment period if such a period is on the agenda for the meeting.

B. During a public meeting on an agenda item or

C. At other times with the permission of the presiding officer.

6. All persons wishing to speak to the council shall state their name, address and the subject matter on which they wish to speak for the record. All speakers that wish to address the City council must do so through the mayor. No person shall address the council unless he or she has been recognized by the mayor. The decision of the mayor to recognize or not recognize a person may be changed by order of the council. In the interest of facilitating the business of council, all persons addressing the council shall be limited to 3 minutes.

7. During formal public hearing, all interested parties will be allowed to address the council. The applicant shall not be limited to the 3 minute time limit but shall not be repetitious nor digress from the issues before the Council.

8. At the end of the regular city council meeting, the administration and/or council members may request that an item be placed on a future agenda for consideration by the council.

9. Members of the audience shall respect the rights of others and shall not create noise or other disturbances so as to disrupt or disturb persons who are addressing the city council, council members who are speaking, or otherwise impede the orderly conduct of the meeting. All persons addressing the city council shall speak in a civil and courteous manner and shall not yell scream or use foul language. Speaker shall address the agenda topic to which they are speaking on and shall not be repetitive.

The City Administrator further stated “I suggest that we implement those effective immediately and any such violation of the rules would be… obviously the Mayor will call the attention one time and if beyond that if it continues, it would be tasked on to law enforcement present to make a decision on where to go with that. That is my suggestion…”

The Council made and seconded a motion for the ordinance and passed it unanimously.

During the interview after the meeting, reference was made to the police tape draped around the meeting carport, informing her it made it difficult to take pictures through the tape and bars and under the canopy, which didn’t portray a very good image of the city.

Mrs. McCoy stated “that that was not for the press, we know who you are and you can stand up and take pictures…”

Several other items were on the agenda, including the possibility of a police force and will be discussed in an article in the upcoming Sunday edition of The Messenger, as well as online at www.messenger-news.com.