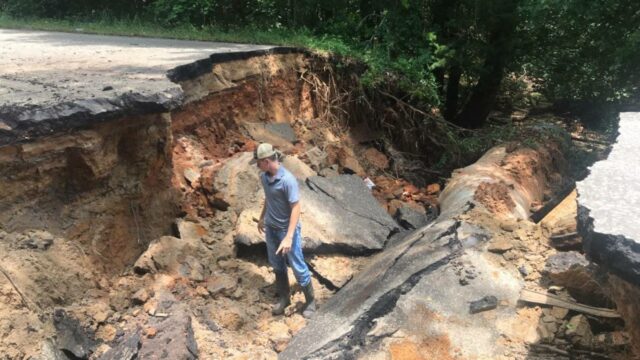 ANDERSON COUNTY – Imagine, if you will, you’re driving down a country road at night and you see water coming over the roadway. What do you do? Like the commercials say, you turn around so you don’t drown.

After you have turned around, you travel back the way you just came. As you’re driving, all of a sudden you find yourself and your vehicle falling into an eight to 10 foot sinkhole where the road had been less than five minutes prior.

That scenario played out on Saturday night, May 18, as a senior in high school was very nearly forced to miss graduation and a whole lot more after his truck fell into a hole on Anderson County Road (ACR) 181.

Even though he was banged up, Logan Lowery, 18 – a graduating senior at Lovelady High School – didn’t appear to have suffered any major injuries and took the time to speak about his near tragedy prior to the Lovelady Athletic Banquet held on May 20.

“I was on my way home from my girlfriend’s and I was waiting for the storm to clear. I was on (ACR) 181 and I had passed the spot where I had crashed. I saw some water over the road on the last curve (before the intersection of ACR 181 and US Hwy. 287) so I turned around and was going to go back all the way through Elkhart,” he said.

“This spot,” Lowery continued, “I had literally just passed two minutes before was caved in. I crashed and I was stuck. I fought for a few minutes and was able to get out from underneath the steering wheel where I had been pinned. I jumped up on about a seven-foot ledge, climbed out of the hole, ran up the hill and called my parents and the authorities.”

He said he actually saw the hole before he hit it.

“I thought it was going to be a little speed bump and it would hurt a little bit. Little did I know I was about to nose-dive into an eight to 10 foot hole, about 15 foot across,” Lowery explained.

He said as soon as he hit “… my body went straight under the steering wheel and pinned me. Honestly, I thought I wasn’t getting out of there. I didn’t have any (cell phone) service, I was pinned and it seemed like it took forever – even though it was probably only two or three minutes – to get out of there. I just thought I wasn’t getting out of there by myself. I thought someone might come along and hit me or the water was going to rise and I was going to drown.”

Once he finally managed to free himself from the vehicle, Lowery said his first thought was, “Where did this come from? Maybe I was dreaming because it seemed unreal.”

When he was finally able to get in touch with his parents, Lowery said he didn’t think they quite realized what had happened.

“Lo and behold, when they walked up, it was like ‘He’s in the Grand Canyon,’” he said with a laugh.

As the discussion continued, Lowery was asked if he had been given any reason as to what caused the road to vanish like it did.

“When the county commissioner came up, he said we’ve had this happen before but not on this road. He said it was a complete deterioration of the clay and sand under the road. He also said it had probably washed out over time. He was pretty shocked to see what had happened,” Lowery said.

He added he was glad it happened to him, as opposed to someone else.

“A little old lady wouldn’t have been able to get out of there. They also have school busses going down that road every day,” Lowery said.

Anderson County Commissioner Precinct One Greg Chapin was unavailable to comment on the matter. As the rain began to fall in south Anderson County, Commissioner Chapin’s office reported he was out in the precinct trying to repair and prevent further damage from occurring to the roads.