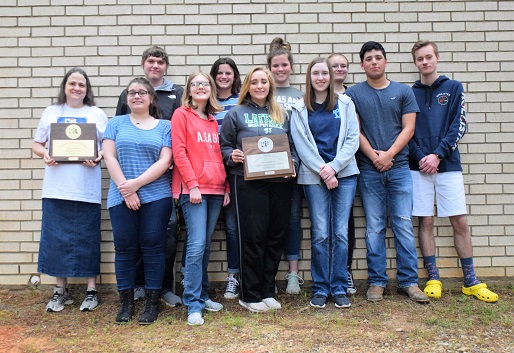 LATEXO – While number seven was close to heaven, number eight is just as great  – at least when it comes to UIL Mathematics at Latexo High School.

Individually, the Math Team – comprised of Camryn Craven, Riley Catoe, Laura Bustamante, Sydnee Craven and Halleigh Castleberry – placed second, third, fourth and sixth. As a team, the Tigers blew their competition away with a combined total of 724. The second place team from Sundown was 140 points back with a 584.

The Current Issues team is comprised of Brenna Ashley who finished third, Elena Hewett who finished in fourth, Dolan Mullins who finished seventh, Peyton Herrera who finished eighth and Taryn Curless who served as an alternate this year.

On Tuesday of this past week, the teams sat down to discuss their recent success.

Asked what it felt like to win the state championship for the eighth consecutive year, Camryn Craven said, “It was 50 percent ‘Thank God’ and 50 percent ‘This is my last year. I’m glad we won again.’ I was slightly worried. We have been working really hard this year, but we’re not as strong as we have been. However, we are getting there.”

Three team members are scored during the competition while the fourth team member acts as a tie breaker, Cravens said.

When asked what the reaction was when it was announced Colby Endres from Muenster placed first individually, Riley Catoe replied, “It was expected.”

“I wasn’t surprised,” Camryn said with a laugh, “but I was still a little mad. He has an ex-4A coach coaching him but it still takes a lot of hard work to get that score.”

Laura Bustamante clarified that six points in the competition was only one question.

With two of the two of the five team members graduating this year – Camryn and Riley – the coach was asked if she had any prospects on the horizon to take their place.

“I started working with five – actually today. I have five newcomers that I will give a shot. I will give them about a year to a year and a half and if they don’t make the cut, they get replaced,” Cravens said.

She was also questioned about how she maintained the team’s winning streak.

“My first group that I had in 2012, three of them graduated. So, all of the scorers I had graduated. I was working with an alternate so I had two people I was working with. I had two people I was carrying over to 2013 so I went to the ninth grade and found the smartest kids I had. I took the cream of the crop and started working with them. So far, it has worked out that the new team members scores have been good enough and have been counted. I will say I don’t think this would have worked out if we didn’t have such a fine AP program at the high school,” she explained.

“I see these kids as eighth graders,” Cravens continued. “Then I teach them as ninth, tenth, eleventh and twelfth graders. By them being pulled out from the kids who struggle somewhat with math – these are the kids you can push really hard and really fast. If we did not have this system in place, I could not get them as high as they need to get to keep winning.”

Changing gears over to the Current Issues team, it should be noted they also have a slew of state championships under their belts with titles in 2010, 2011, 2014 and 2016.

Asked what type of questions were asked on the test, Peyton Herrera explained it could be a wide variety of topics.

“It can be from local news all the way up to international news. There is no certain topic to study. When we first get to school, Mrs. Watson will have the stuff on a desk for us to start studying,” he said.

Elena Hewitt added, “Some of the questions on the test included local news like the college admissions scandal up to what (Israeli) President Benjamin Netanyahu had campaigned on in relation to the Gaza Strip, the West Bank and Golan Heights. It was a very broad range.”

Cravens chimed in and said several of the years between 2010 and 2019 where they did not win, the Latexo team finished in second place.

“There is a school known as Sabine Pass that is their rival,” she said.

As to some of the questions the students are asked to answer, Taryn Curless said one of the more unusual questions on the test concerned a character on Sesame Street.

“We had a question about a Sesame Street character on one of our tests. They had a new character on the show about how to support children with autism. It is something we would have never studied,” she explained.

As the discussion continued, Cravens estimated the coach – Kim Watson – spends between “… 10 and 15 hours per week just on finding the news she will put all together in one place that she will make them memorize. They have an enormous quantity of news they are responsible for memorizing. It comes down to what you can remember the most. They were just three points from also being champions.”

From all of us at The Messenger, congratulations to both UIL teams and continued success in the 2019-2020 school year.