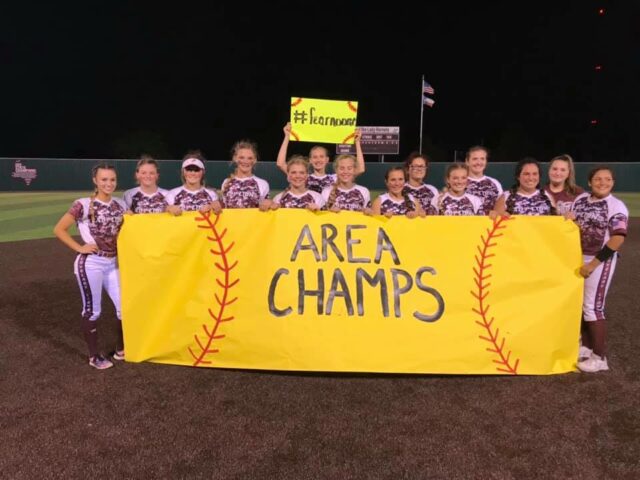 HUDSON – To say the Lovelady Lady Lions are on a roll would be an understatement. The Lady Lions blanked the Cushing Gal Kats in the Bi-District Round of the playoffs as Lovelady’s Mimi Sandoval threw a no-hitter in the 10-0 win.

Following their opening round win, the Lady Lions traveled to Hudson to take on the Big Sandy Lady Wildcats in the Area Round of the postseason. While the competition gets a little tougher with each round, Lovelady stayed hot as they beat up on Big Sandy, sweeping a doubleheader by scores of 9-1 and 5-1.

In the first game of the best two-out-of-three series, Mimi Sandoval showed why she should be given serious All-State consideration in the pitcher’s circle. She needed just 13 pitches to strike out the top of the Ladycats’ batting order.

When Lovelady came in from the field they seized the early lead. Jacy Stubblefield led off the Lady Lions’ half of the first inning with a strikeout, but Makayla White followed with a single.

Linda Martinez was up next and ripped a single to deep right which knocked in White. On the throw in from the outfield, Martinez moved into scoring position. Sandoval was up next and reached on an error, allowing Martinez to scamper home.

Amber Mikes and Erin Sample both grounded out to end the inning, but the Lady Lions had taken the early lead at 2-0.

Sandoval continued to dominate the Lady Wildcats when they came to bat in the second inning. A groundout was followed by two more Ks for Sandoval which brought Lovelady up to bat, once again.

The Lady Lions extended their lead to 5-0 by the time the second inning was over. Ryleee Biedrzycki led off the frame with a lineout to the shortstop position for the first out while Bailee Albinus followed with a single to right. She stole second – as well as third – and came around to score on Stubblefield’s single to left.

Stubblefield also stole second and third and when White reached on an error, Stubblefield crossed the plate to make the score 4-0. A double from Martinez drove in White – and just like that – the Lady Lions had a five-run lead.

After the Lovelady line-up was finally retired, Sandoval resumed her spot in the pitcher’s circle. She continued to frustrate the Lady Wildcats as she struck out the side in the third inning.

Lovelady tacked on another run in the top of the third after two quick outs. After Mikes flew out and Sample grounded out, Biedrzycki laced a single into right. Albinus drove her in with a shot to center and then Katie Thompson grounded out to short, but the Lady Lions now led 6-0.

Big Sandy finally put a hitter on base in the fourth inning. Sandoval recorded two quick outs and then walked the third batter she faced. That was as close as the Lady Wildcats would get, however, as Sandoval retired the next batter she faced on a three-pitch strikeout.

Lovelady extended their lead in the fourth inning as they pushed the score out to 7-0. Stubblefield bunted her way aboard and after stealing second, she took third when White’s sacrifice attempt was booted by a Big Sandy infielder.

Martinez followed with her third RBI of the game as she flew out to deep center, allowing Stubblefield time to tag up and score.

A quiet fifth inning gave way to the sixth as Sandoval was relieved by Mikes, who worked an uneventful half inning.

The Lady Lions added two more runs to their total and after Big Sandy finally scored a run, Mikes got the final out as the Lady Lions cruised to a 9-1 win in the first game of the double header.

After about 20 minutes, game two got underway. Lovelady was the visiting team in the second half of the double header and while they threatened in the top of the first, the Lady Lions couldn’t push anyone across the dish.

Macie LaRue got the start for the Lady Lions and she worked a 1-2-3 inning, bringing Lovelady in from the field. This time, the Lady Lions were able to score as they took an early 1-0 lead.

Sample led off the inning by lining out to short. Albinus was up next and drew a walk. She moved to second on a wild pitch and then stole third. A second wild pitch allowed her to sprint home with the game’s first run, but that was all Lovelady could muster before they ran their way out of the inning.

LaRue got two quick outs in the bottom of the second but then yielded a hit and a walk before she coaxed a groundout  to third baseman Sarah Thompson for the final out of the frame.

Lovelady padded their lead in the top of the third. White led off with a walk but Martinez flew out to shallow center. Sandoval was up next and also drew a walk. A passed ball advanced the runners and when Mikes laid down a perfect bunt, White scored while Sandoval moved to third.

Sample also drew a walk and with only one out, Lovelady had the bases loaded. A pitching change was made and Albinus promptly greeted the new hurler with a single to center. The base rap drove in Sandoval and Mikes, although Sample was thrown out on the base paths, during the play.

After Biedrzycki flew out to end the inning, the Lady Wildcats shaved a run off of the Lovelady lead. LaRue began to struggle with her control as the bottom of the third inning got underway. She walked the first batter she faced, hit the next one and then walked another Lady Wildcat.

Albinus came on in relief but walked the first batter she faced to push a run across the plate for Big Sandy. After the Lady Wildcats scored, the Lady Lions turned to their ace and brought in Sandoval. The freshman right-hander struck out the first two batters she faced and then recorded the third out on a force at home to keep the Lady Lions ahead by a score of 4-1.

Lovelady was unable to generate any offense in the top of the fourth which seemed to shift the momentum over to the Lady Wildcats dugout. Sandoval returned to the pitcher’s circle, and to no one’s surprise, she blew a third strike by the leadoff hitter for her third strikeout of the four batters she faced.

The next batter Sandoval faced, however, tagged her for a hit. It was the first hit she had given up after she had faced 37 batters in 11.1 innings of work. Her response? She struck out the next hitter she faced.

While Sandoval gave up another hit that was as close as Big Sandy would get as she closed out the fourth inning with the Lady Lions still ahead by a score of 4-1.

The Lady Lions would go on to tack on another run in the top of the seventh while Sandoval continued to dominate the Big Sandy lineup as the Lady Lions capped off the 5-1 victory. .

The win moves Lovelady into the Regional Quarterfinals where they will face the winner of the Grapeland / Woden series. As of press time the score of Game Three between the Sandiettes and Lady Eagles was unavailable.