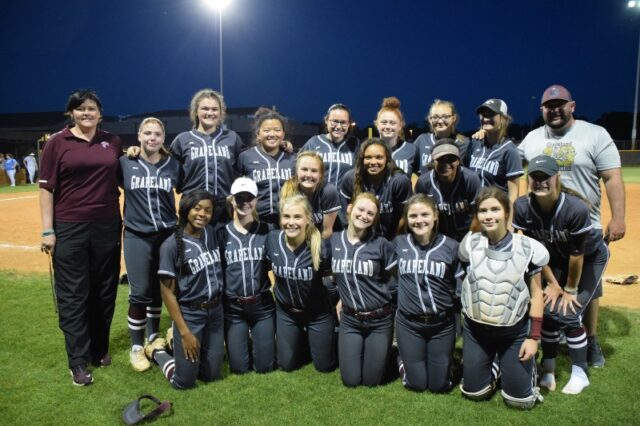 NACOGDOCHES – The Grapeland Sandiettes found themselves in an unusual role on Friday, April 26 as they took on the Joaquin Lady Rams in the opening round of the playoffs. They were the underdogs.

That role didn’t seem to fit too well, however, as they jumped out to an early lead and then held on to win the Bi-District Championship by a score of 8-6.

The Sandiettes led off the game and quickly jumped out to a 3-0 lead. Kiera DeCluette was the first batter Joaquin’s Chloee Mason faced and DeCluette drew a walk. Two pitches later, she stole second.

Diamond Dunn was at the plate when DeCluette stole second, but swung at a pitch out of the strike zone for strike three. Cadie Belle Currie followed Dunn in the lineup and hit a sharp grounder to short which was booted for an error. DeCluette, who had swiped third earlier in Currie’s at-bat, scored on the play while Currie reached first safely.

Makayla McCombs came in as a courtesy runner for Currie and moved to second when Cheney Boyd slapped a shot to third that was mishandled. Cierra Simon followed with a single to advance the runners and load the bases for Grapeland.

Madi McCombs was up next and was hit by a pitch which pushed Makayla McCombs across the plate. Jaycee Graham was the seventh batter of the inning and while she popped up to right, the ball was deep enough to allow Boyd to tag up at third and scamper home to make the score 3-0.

After Keke Harris struck out to end the Grapeland half of the first, Currie assumed her regular spot in the pitcher’s circle and went to work.

She walked Ebbie McCann to open the bottom of the inning, but got Jayden Bass to pop out to short. C. Mason was up next and singled to center, moving McCann to second. Molly Mason was the next batter to dig in against Currie and reached base on an error.

The error sent McCann to third, but when Kennedy Stanley slapped a ball to Simon at short, Simon threw home to catch McCann for the second out. Three pitches later, Chrislyn Pena grounded out to Harris at first base to end the inning with the Sandiettes still up by three.

That would change in the second inning. After Mason retired the Grapeland side in order, Joaquin sliced a run off of the Sandiettes’ lead. Kalie Brooks drew a walk to lead off the Lady Rams’ half of the second, but Currie followed up with a strikeout of Kaylea Neal. During Neal’s at-bat, Brooks stole second and then moved to third on a Madison Baker sacrifice.

It appeared Currie might wriggle her way off the hook for the second straight inning, but McCann singled to right to drive in Brooks which made the score 3-1. Following the run, Bass popped up to end the inning.

Grapeland struck back in the top of the third as the Sandiettes plated two runs to make the score 5-1. Currie led off with a single as Mak. McCombs came in as a courtesy runner for her. Cheney Boyd popped up for the first out, but Simon followed with a single to advance Mak. McCombs. Mad. McCombs was up next and laced a double to left to drive in both Mak. McCombs and Simon.

Mason managed to get both Graham and Harris out to end the inning, but when Joaquin came in to bat, Currie held them in check.

The Sandiettes tacked on a run in the fourth when Haylee Reed and Kiera DeCluette both had doubles. With the score now 6-1, C. Mason seemed to finally settle down as she retired the next two batters to get out of the fourth.

When the Lady Rams came to bat in the bottom of the inning, they jumped right back into the contest as they scored three runs.

With two outs and no one on base, Grapeland let up, assuming they would get the third out in a timely manner. However, a walk, followed by back-to-back-to back singles pushed two runs across the plate and whittled the Grapeland lead down to 6-4. 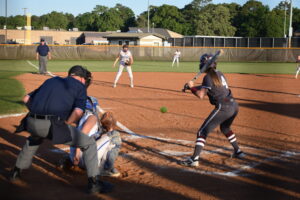 Currie struck out Stanley to end the inning, but as the Sandiettes came off the field, they appeared nervous.

A quiet fifth inning gave way to the sixth where the Sandiettes pushed their lead out to 7-4. Harris led off the inning with a triple and scored on Reed’s sacrifice. That was all she wrote, however, as C. Mason regained her composure long enough to retire the side.

When the Lady Rams came in from the field, they showed they still had some game left as they plated two runs to cut the lead to 7-6.

Fortunately for Grapeland, Joaquin would get no closer as the Sandiettes tacked on a run in the top of the seventh and then held the Lady Rams scoreless to win the Bi-District game by a final score of 8-6.

The win sent the Sandiettes into the Area Round of the playoffs where they faced the Woden Lady Eagles. As of press time, however, scores from the best two out of three series were not available.