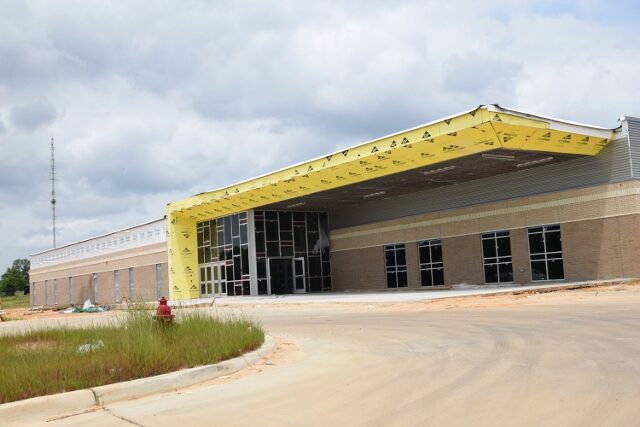 Board Receives Update on Storm Damage

GRAPELAND – During the regularly scheduled meeting of the Grapeland Independent School District Board of Trustees held on April 25, Danny Berry – president of the Berry and Clay construction firm – was on hand to discuss the progress of the new elementary construction project.

Berry provided an update an update on the district’s contingency fund – an account set aside for incidentals related to the construction. He said the fund was very solid and had funds of $171,109 which would be used for furniture, fixtures and landscaping.

The CEO also revealed a portion of the elementary would be available sometime in June so teachers could begin to transition from the old building to the new one.

“It will be ready in stages during the months of June and July,” GISD Superintendent Don Jackson explained. “For teacher purposes, the classroom wings will be the first things finished. Then, the special education wing will be ready and then the office. The last thing to be completed will be the gym and cafeteria.”

Jackson added, “They are down to painting and a punch list. They are getting really close. We will be in the building to start next year.”

Sticking with the construction, or re-construction theme in this case, the trustees approved the hiring of DK Haney Roofing Company to assess and repair the damages to GISD facilities and property caused by the recent storms.

The superintendent indicated the company had found “… damage everywhere. Several of our roofs are going to have to be replaced. Also, we have damage out at our track, the stadium lighting, the scoreboard and the bleachers. They estimate we have over $1 million in damage.”

Jackson stressed the structural integrity of the buildings was still intact and only one building suffered any leaks.

As the meeting continued, an update was provided on the child care center.

“We are in the midst of a remodel on part of the old elementary – the wing that has the gym. We are on schedule, but we have some bathroom work being done. We have shelving put up and the next thing we need to start on is ordering resources like baby beds and other supplies. We are moving quickly and next month we will release the name of our child care director. We have also filed the required paperwork with the state. In the next 60 days, they will be coming down here to do an assessment of our facility. We hope to open Aug. 1 of this year,” Jackson said.

Prior to the elementary school update, Lawanda Maddux was recognized by the Board of Trustees for her service of over 50 years in education.

The Grapeland Noon Lions Club was also given recognition for their elementary school reading project where members of the Lions would come and read to 3rd graders. The project was led by Board VP Eddie Childress.