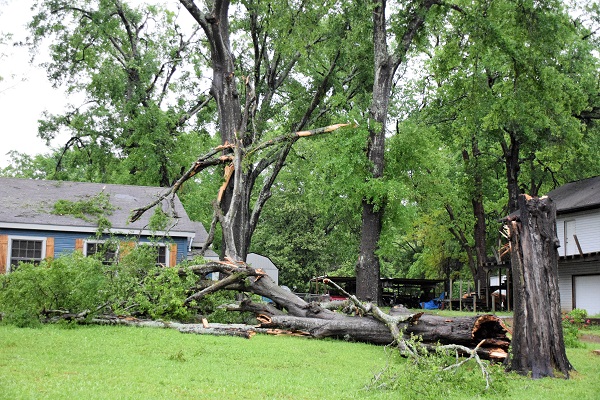 ANDERSON COUNTY – It’s as if Mother Nature is in a boxing match with East Texas. On Saturday, April 6, Round 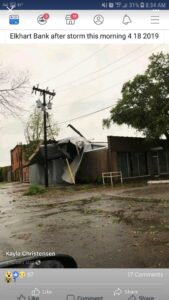 One began with severe hail damage to the Grapeland area. Hail, the size of softballs, destroyed vehicles and tore up roofs.

A week later, on Saturday, April 13, Mother Nature came back for Round Two as she unleashed her fury with several tornadoes which touched down in eastern Houston County. Four people were killed in these storms. One perished outside of Weches, one at the Caddo Mounds Historic Preservation site and two children in Angelina County when a tree fell on the car they were passengers in. 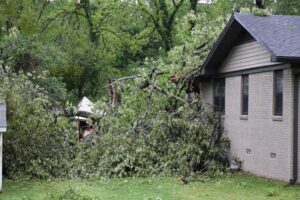 18. By later that Thursday morning, no reports of tornadic activity had been received but what appeared to have been straight-line wind damage in the Gardner St. area was observed.

Trees were sheared off, outdoor furniture was relocated, houses with tree limbs on the roof were noticeable and several power lines along the side on Loop 256, near the intersection of Hwy. 79, had been twisted around each other.

A statement from the city of Palestine reported, “Strong storms moved through the area last night causing severe damage throughout the city. The Water Treatment Facility has sustained damage including several downed power lines and is currently without power. Until further notice, please conserve all water use to emergency use only.  We will continue to keep City residents informed as we continue efforts to restore operations to all city facilities.”

In regards to power the statement reported “… Oncor will be clearing major feeders first before they can send crews to individual damage. Please bear with us as we 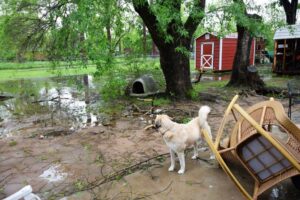 work to clear the streets and Oncor restores power. Be aware of your surroundings and do not attempt to go near a downed power line or fallen tree.”

The Palestine Compost Facility, where people can drop off their tree debris, was opened until past 7 pm on Thursday at no cost to the user. 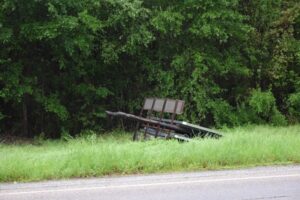 e maps from Oncor, the most meter outages showed nearly 9,000 residents without power at 3:30 am.  By late morning, the outage maps were only showing approximately 800 residents still in the dark.

As of Thursday afternoon, no reports of death or injury had been received.

In Elkhart, the schools got a late start as they did not open until 10 am. Trees were downed and some wind damage occurred throughout the city.

Power was also lost in Elkhart as nearly 700 homes were left without electricity.

Further to the south, the Andrew J. Hopkins Special Activity Center was opened in Crockett as a precautionary measure to serve as a shelter for any people who were displaced by the storms.

For those old-school boxing aficionados, this is a 15-round fight. The first three rounds have pretty much gone to Mother Nature. There is, however, a lot of the fight left and if the response for the various communities is any indication, look for East Texas to battle back. 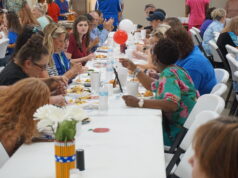 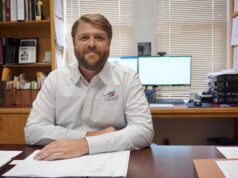