ELKHART – The Elkhart Lady Elks remain atop District 20-3A following their 15-5 win against the Buffalo Lady Bison on Friday, March 29. Buffalo had given Elkhart its only district loss (7-8) and were tied for the District 20-3A lead headed into the game.

It was a back-and-forth affair through the early innings until the Lady Elks exploded for five runs in the fifth and six runs in the sixth to win the game by a final score of 15-5.

As the game began, Elkhart’s Gracie Johnson was in the circle for the Lady Elks and she worked an easy 1-2-3 inning. First, Johnson got Rylee Reeves to pop up to short. Then she got Mackenzie Barnes to fly out to center and then caught Taylor Beshears swinging at strike three to retire the side.

The Lady Elks struck first as they roughed up Buffalo pitcher Addison Lathrop for a run in the first frame. Johnson led off for the Elks and drew a walk. Jaci Jordan moved her to second as she bunted her way into a fielder’s choice.

With Johnson now on second, Makayla Walker ripped a double into left to drive in Johnson and give the Lady Elks an early 1-0 lead. Lathrop shook off the run, however, and struck out both Ashlyn Mattern and Alana Canaday to send the game to the second inning.

The Lady Bison managed to tie things up in the top of the second. Lathrop led off the frame with a double to left and was replaced on second by a courtesy runner – Justice Herrera. Caylee Ayres was up next and sent a Johnson pitch into deep left for a double, which plated Herrera. Ayres, however, was picked off at second.

Makenzie Simpson drew a walk but Iris Valles struck out. Melanie McGill was up next and she laced the third double of the inning into center. Simpson was off at the crack of the bat, but she was gunned down at the plate on a bang-bang play for the third out.

Strangely enough, the momentum appeared to jump to the Buffalo dugout and give Lathrop a boost in the bottom of the second. She struck out Emily Lively, Lynsie Walding and Emma Hollingsworth to end the inning with the score tied, 1-1.

Buffalo took the lead when they came in to bat in the top of the third.  After Johnson struck out Madison Walker, s 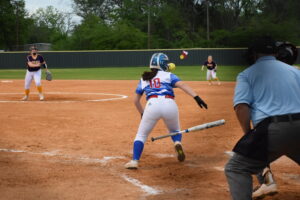 he yielded three consecutive singles to Reeves, Barnes and Beshears. A walk to Lathrop pushed Reeves across the dish and made the score 2-1, in favor of Buffalo.

That was all the Lady Bison would get, however, as Johnson got Ayres to ground into a force at home and then struck out Valles to end the top half of the third.

Elkhart struck back when they came in from the field. Heaven Paquette led off with a strike out but Johnson followed with a single. Jordan was called out on strikes but Walker slapped a shot up the middle to move Johnson to third.

On the play, an error allowed both Johnson and Walker to cross the plate as Elkhart re-took the lead at 3-2. Mattern drew a walk and scampered home when Canaday lined a triple into right field to make the score 4-2.

After Lathrop struck out Lively, the Lady Bison came in from the field and showed what they could do at the plate as they reclaimed the lead at 5-4.

Valles opened the fourth inning with a single just over third while McGill drew a walk. Johnson struck out Walker but on her next pitch to Reeves, Reeves had Johnson’s pitch timed to perfection as she deposited it over the center field fence for a three-run blast to make the score 5-4 in favor of Buffalo.

Johnson regained her composure after the homer as she got Barnes to ground out and Beshears to fly out to end the top of the fourth.

The Lady Elks were unable to generate any offense in the bottom of the fourth which kept the score at 5-4, in favor of Buffalo.

Johnson held the Lady Bison in check in the top of the fifth but when the Lady Elks came into bat, the Elkhart offense exploded for five runs to make the score 9-5.

Jordan opened the inning with a single and moved to second when Walker singled to center. Mattern also singled and drove in Jordan from second base to tie the game at five. Canaday followed with a grounder to third which caught Walker as she tried to advance.

Mattern took second on the play and when Lively hit a Texas Leaguer just over second, Mattern was able to race around the bases and cross home plate to give the Elks the lead once again at 6-5.

That was all she wrote for the Lady Bison as the Lady Elks would add three more runs in fifth to make the score 9-5.

Johnson retired the side in order in the top of the sixth but when the Lady Elks came in to bat, they crossed the dish six times to end the game on the 10-run mercy rule with the score 15-5 with only one out.

Johnson picked up the win for Elkhart as she pitched six innings and gave up five runs on 11 hits. She also struck out seven and walked three.

Lathrop took the loss in 5.1 innings. She gave up 12 runs on 12 hits, struck out six and walked three.