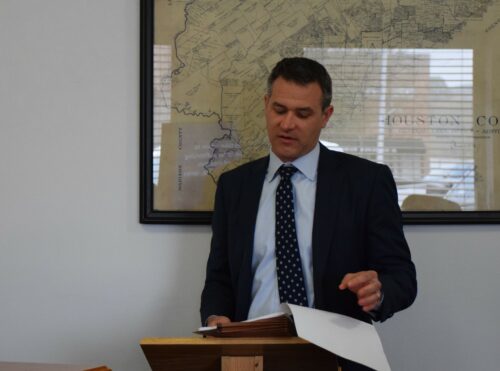 HOUSTON COUNTY – During a meeting of the Houston County Commissioners Court held on Tuesday, Feb. 12, a resolution expressing the intent to finance expenditures to be incurred by the county was discussed.

This intent came to fruition on March 12 when the court passed a measure authorizing the issuance of Houston County, Texas tax notes, series 2019.

According to NASDAQ, tax notes are, “Notes issued by states or municipalities to finance current operations in anticipation of future tax receipts.”

“There is a funding mechanism called tax (anticipation) notes which the court is eligible for. It is not a bond or a certificate of obligation. With the huge amount of rains we have had, the commissioners’ budgets have been exhausted,” Houston County Auditor Melissa Jeter said during the February meeting.

Jeter explained she was tracking four budget line items within the road and bridge departments. These were: road materials; haulers; bridges and culverts.

“Those four items – since Oct. 1 – the commissioners have spent almost $500,000. That is their whole budget for the entire year,” Jeter said.

In addition, the loss of timber funds has directly impacted what the county could do. Furthermore, FEMA monies owed (approximately $600,000) to the county from 2015 flood damage have yet to be received.

Because of these reasons, Jeter said she had contacted the county’s financial advisors and bond counsel to find out what could be done to help offset losses incurred by the county due to the massive amounts of damage done by the heavy rains in recent months. They suggested the tax anticipation note approach.

During the March 12 meeting, Jeter introduced Eric Macha with Hilltop Securities who provided the court with a brief summary about moving forward with the tax notes.

“What I have here is an order to approve the sale of tax notes to a purchasing bank. I have put together some of the final terms based on the bidding process. In total the county would issue $1.8 million in tax notes to Amegy Bank which was a bidder. That would fund $1.75 million in construction funds,” the financial analyst said.

“As Mrs. Jeter mentioned, in February you approved a resolution which allows you to go back and use the proceeds from this tax note to reimburse yourself for past expenditures. The funds are scheduled to be delivered to the county on April 11,” he said.

Macha added the county had the option of paying off the tax notes any time after August with no penalty. The interest rate is 2.56 percent and must be repaid within seven years.

“The average annual payments come to $283,000 per year for that seven year duration, if the county chooses to pay off at maturity and not pay them off early. The first payment would be scheduled for February 2020,” he explained.

Before the tax notes discussion concluded, Jeter stressed, “All of this is designated to go to county roads. We cannot use this for anything else.”

A motion was made, seconded and unanimously approved to order the issuance of Houston County tax notes, series 2019.