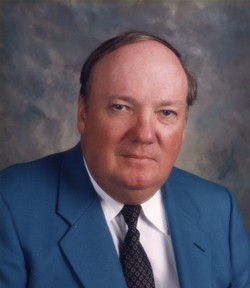 John William Klein, 78, died Saturday, February 16, surrounded by family, at his beloved Klein Ranch near Crockett, Texas. John was born May 2, 1940, in Houston, Texas. He graduated from the University of Texas where he was a member of Delta Upsilon fraternity. John was a direct descendant of John Adam Klein and other German settlers who settled north Harris County in the mid 1840’s. In 1979, John and his wife Maria founded Klein Bank together in the heart of the Klein, Texas community. Banking was his lifetime career but the Texas land was his lifetime love. He was a man of the land. John and Maria purchased the land for Klein Ranch in 1983 and when he retired as Chairman of the Board of Klein Bank, he moved to his ranch on the banks of the Trinity River where he ran an excellent, sizeable cattle operation while taking time to travel, hunt, fish and enjoy the Santa Fe Opera and become a patron of the arts. He is survived by his loving wife, Maria Whitmore Klein, of 42 years. John was preceded in death by his father Alvin A. Klein and his mother Roberta Theiss Klein.

He is survived by his son John W.B. Klein; daughter Katie Papetti and husband Ryan; daughter Kimberly Cauthorn and husband Clay; son William A. Klein and wife Mandy; daughter Hallie Immroth and husband Andy; and grandchildren Clara Rose Papetti, Cal Cauthorn, Rebecca Cauthorn, Anna Cauthorn, and Nate Immroth. He was preceded in death by his son John Callaway Klein and grandson Aidan Immroth. He is survived by his sister Sonja Rose Klein, his brother Allan R. Klein and wife Alma, and his brother David R. Klein and wife Mary, as well as numerous nieces and nephews, cousins, and friends. Visitation was held at Klein Funeral Home (16131 Champion Forest Dr., Klein, Texas 77379) on Wednesday, February 20 from 5 to 8 p.m. Funeral Services were held at Trinity Lutheran Church of Klein, Texas (5201 Spring Cypress Rd., Klein, Texas 77379) at 11 a.m. on Thursday, February 21 with private burial to follow Friday at Klein Ranch. In lieu of flowers, memorial donations may be made to Grace Lutheran Church of Crockett, Texas and MD Anderson Cancer Center.