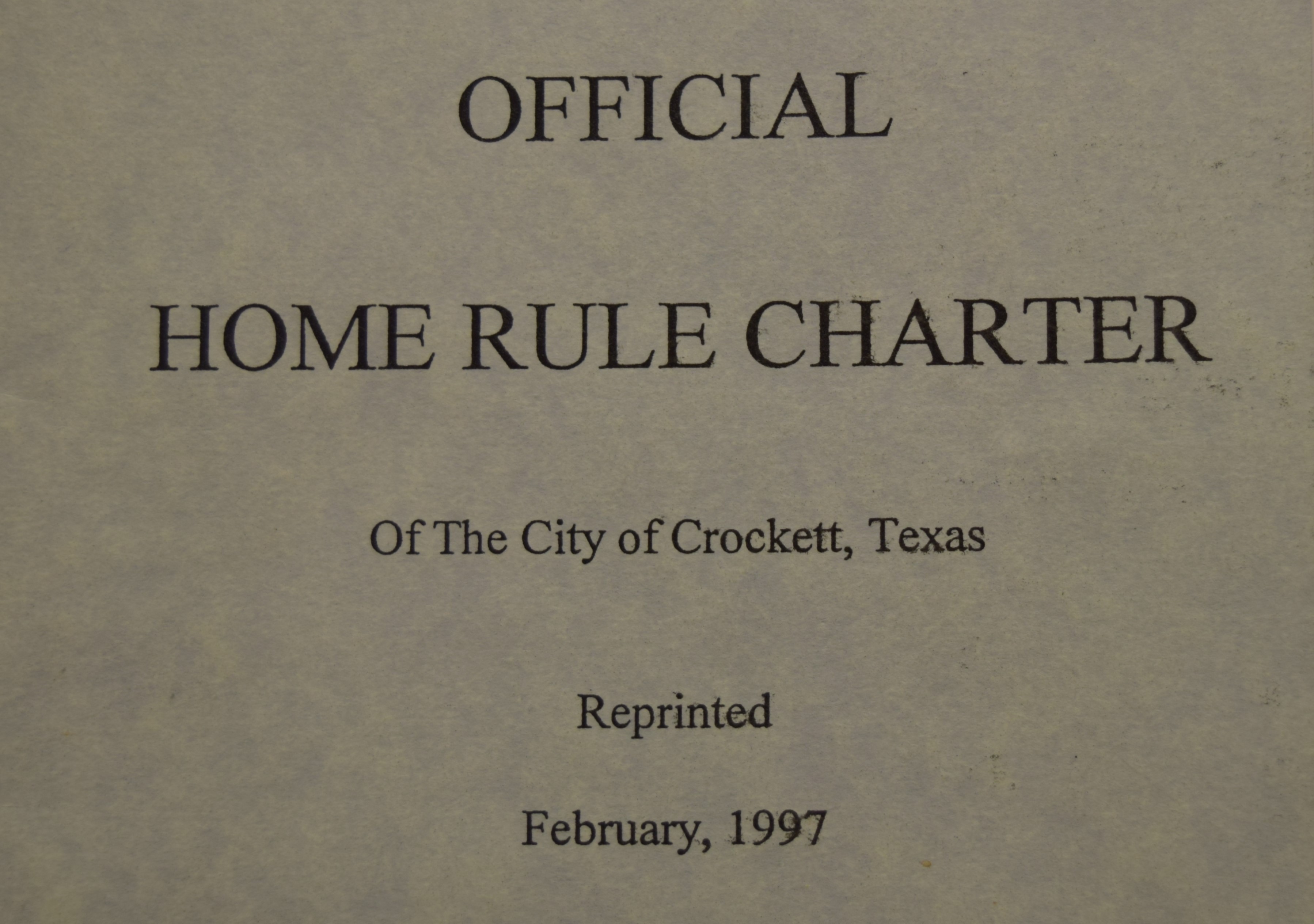 CROCKETT – Despite years of talking about it, budgeting for it in Fiscal Year (FY) 2018 and approving a measure to move forward on it less than a month ago – the Crockett City Council reversed course concerning a revision to the city’s charter during a meeting held on Monday morning, July 2.

In a June 4 meeting of the council, a motion was approved by a 3-2 vote to hire Edmonds and Associates to help revise the city’s charter. At that time, City Administrator John Angerstein reminded the council the necessary funds had been set aside and the charter revision had been budgeted for in FY 18.

During the July 2 meeting, however, Precinct Two Councilman Darrell Jones voiced his opinion on the matter and said it “… is a waste of money for the city. We can use that money for the streets and I’m totally against it.”

“The last time we visited this matter,” Councilman Ernest Jackson added, “I quite clearly said I was not in support of the city spending its money – at this time – to revise the charter when there are other pressing needs our city is facing right now.” 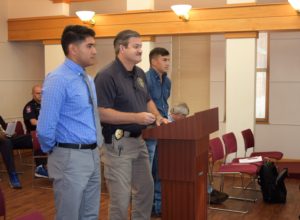 “This is not a vote on the (revision of the) charter. We’ve already passed that,” Mayor Pro Tem Mike Marsh reminded the councilmen.

Angerstein further explained the agenda item being discussed pertained to the establishment of a charter revision committee to recommend changes to the official home rule charter of Crockett.

“It still has something to do with the charter,” Jones remarked.

A motion was made and seconded to create a charter revision committee, but the motion failed by a 3-2 margin. Jackson, Jones and Councilperson Marquita Beasley voted against the measure while Marsh and Councilman Butch Calvert voted in favor of the motion.

Jones and Jackson had voted against the measure on June 4, but had initially favored the charter revision when they approved the Fiscal Year 2018 budget on Aug. 14, 2017. Beasley was not on the council when the FY 18 budget was adopted but had voted to hire Edmonds and Associates during the  June 4 meeting.

“Basically, the charter still goes on,” Marsh said. “It’s already been passed to do (the revision)…”

“You better check your legal standing on that,” Jackson said.

“This is just setting the standards for the people who are going to be on the board,” Marsh said.

“Yes sir, I understand that,” Jackson said. “But, the people who serve on that board are not necessary because I don’t see where the money in order to change the charter will be spent.”

“How can we pass something one meeting and the next meeting…?” Marsh questioned.

“I’m not going to debate that. What I’m against is a charter change at the moment. I’m against any committee being formed to address any changes to the charter,” Jackson said.

“Does this mean we have to go by the charter the way it is written without any changes to it?” Mayor Joni Clonts asked.

“That is correct,” Jones said.

Calvert also weighed in on the charter revision.

“Last summer we all sat here (not including Beasley) and put money in the budget for it. Now, we look like the council who is going to kick this expenditure down the road for somebody else to deal with. We are in a situation here our finances are fairly dire. They are not getting better and this will keep getting more expensive. If we don’t fix it now, our successors are in even more trouble,” Calvert said.

“This is an issue that has to be dealt with. This is an issue we agreed last year to fix. Now, we want to kick this down to someone else. I just don’t think that is prudent when it comes to our responsibilities at this (council) table,” he said.

Jackson reiterated his position on the matter before Clonts moved the council session to the next agenda item.

Prior to the meeting, Precinct Two Councilman Darrell Jone 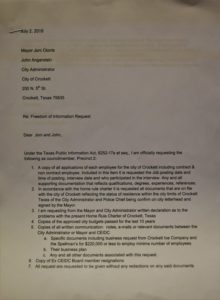 s distributed a letter he had addressed to Mayor Joni Clonts and City Administrator John Angerstein.

The letter was a freedom of information request from Jones to the city. Requested in the letter were: a copy of all applications of each employee for the city of Crockett including contract and non-contract employees; the status of residence for the city administrator and police chief; a written declaration as to the problems with the present Home Rule Charter of Crockett; copies of the approved city budgets passed for the last 10 years; copies of all written communication between the city administrator or mayor and the Crockett Economic and Industrial Development Corporation (CEIDC), specifically those pertaining to the Crockett Ice Company; copies of all ex-CEIDC board resignations; and a request not to redact anything.