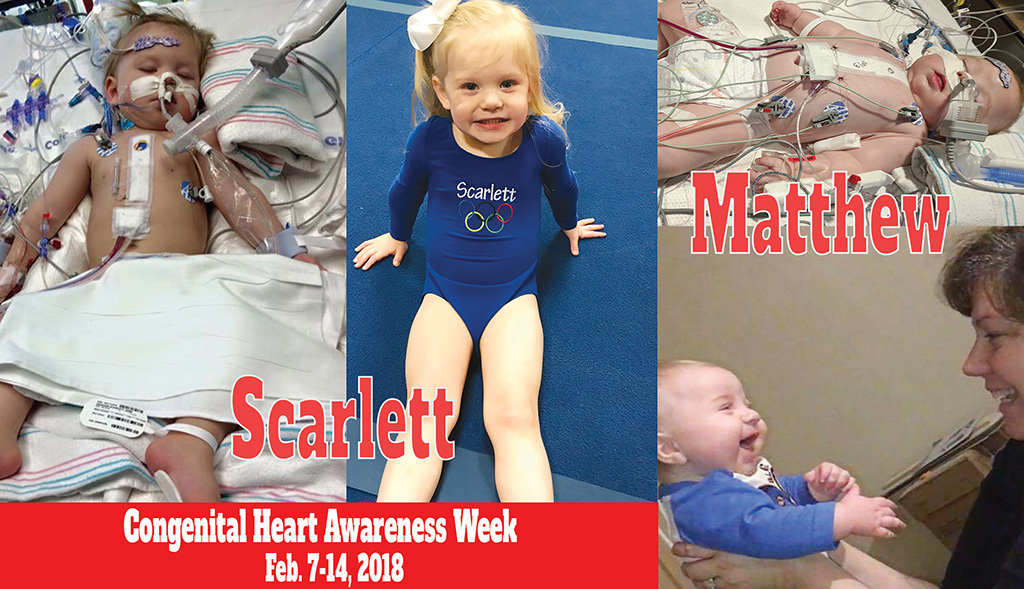 Congenital heart defects (CHDs) are the most common birth defects in the United States, affecting approximately one in every 110 (about 40,000) babies each year.

One of those families is Stephen and Megan Easley, whose son Matthew, was born May 1, 2017 at Texas Children’s Hospital in Houston with a rare heart disease. Matthew had a heart transplant on Oct. 3, 2017 and returned back home with his parents to Houston County in late December 2017.

Another local family affected by CHD is Ashley and Logan Graham of Crockett, whose daughter Scarlett was born with a congenital heart disease on Feb. 5, 2015.

“My pregnancy and delivery was great with no issues. It was not until seven hours after she was born when my husband went to change her first diaper. He looked at me and said ‘Her left side and legs are blue!,’” Ashley Graham explained. “The nurse rushed in and took her to be put on oxygen.”

It was on that day when the Grahams learned their daughter had been born with a heart problem, and the infant was flown by jet to Texas Children’s Hospital in Houston.

“It seemed like the longest day of my life not knowing if my child will make it,” said Ashley Graham, who was stuck at the hospital recovering from delivery for two days before she was able to make it to Houston to see her baby.

“There I sat…in my room…alone. I was in so much physical and mental pain,” Ashley Graham said while her infant daughter was undergoing tests in the Houston hospital until she was able to make it there.

“We waited in NICU (Neonatal ICU) for the doctors to make their rounds. As the doctors pulled out a drawing of the heart, my own heart began to sink. There is no way my child has a heart problem.Why was this not detected in any of my sonograms, I thought,” Ashley Graham said.

Scarlett was diagnosed with Coarctation of the Aorta and Shones Variant Complex.

About 10 days after she was born, Scarlett had her first heart surgery. Surgeons separated her ribs on her left side, collapsing her lung to be able to work on the narrowing of her aorta.

When she was 9 months old, Scarlett had a heart catheterization to attempt to ballon her aorta.

“This procedure did not work at all,” Ashley Graham recalled.

On the day before her first birthday, Scarlett had open heart surgery.

Scarlett, who just turned 3 years old, now has to have annual checkups to keep an eye on her aorta valve.

In the case of the Easley family, they knew their infant son had a heart condition at the mother’s 26-week ultrasound.

Prayers were answered for Matthew’s family five months later when Matthew received a heart transplant on Oct. 3, 2017. Thanks to the heart transplant, Matthew saw the outside of the hospital for the first time in his life on Oct. 25. His family was able to move back to their home in Crockett the day after Christmas on Dec. 26, 2017.

“This week is important because so many families are affected by CHD and we want to help spread awareness to the thousands of families worldwide effected. One in 100 babies are effected by it, and while some families know about their child’s heart during pregnancy and can prepare for it a head of time; others don’t know anything until their child is born,” Megan Easley said.

For the Easleys, it’s about spreading awareness.

“CHD kills more kids than childhood cancer. I know so many ‘heart warriors’ that are fighting for their life. Some don’t get to come home from the hospital because they pass away fighting for their life. I know a family that lost her baby,” Megan Easley said. “There’s a family in San Antonio area, a couple of families in the Houston area, another in Shreveport, La. area, Dallas, Palestine – they’re all over.”

These days, Matthew is a happy, active baby, who loves to smile, and hold toys.

“Matthew is doing pretty good. ECI (Early Childhood Intervention) came out today and said he’s doing a little bit more than when they came out Jan. 17,” Megan said. “Physical therapy is coming out now and hopes to come out twice a week for up to six months unless we need longer. Occupational therapy will be coming out once ECI helps us get it going.”

The Easleys are overwhelmingly grateful someone’s gift of life enabled their son to have a heart transplant.

“That’s our precious grandchild and we are so thankful,” grandfather Joe Easley of Crockett said.

•For many forms of CHD, surgery is not a cure. Congenital heart disease is a lifelong condition requiring specialized care, and often additional surgeries and medications are needed later in life.

• Most causes of congenital heart defects are unknown.

• About 25% of children born with CHD need heart surgery or other interventions to survive.

To see additional photos and to keep up with Matthew’s progress, visit the Miracle for Matthew Facebook page: https://www.facebook.com/miracleformattheweasley