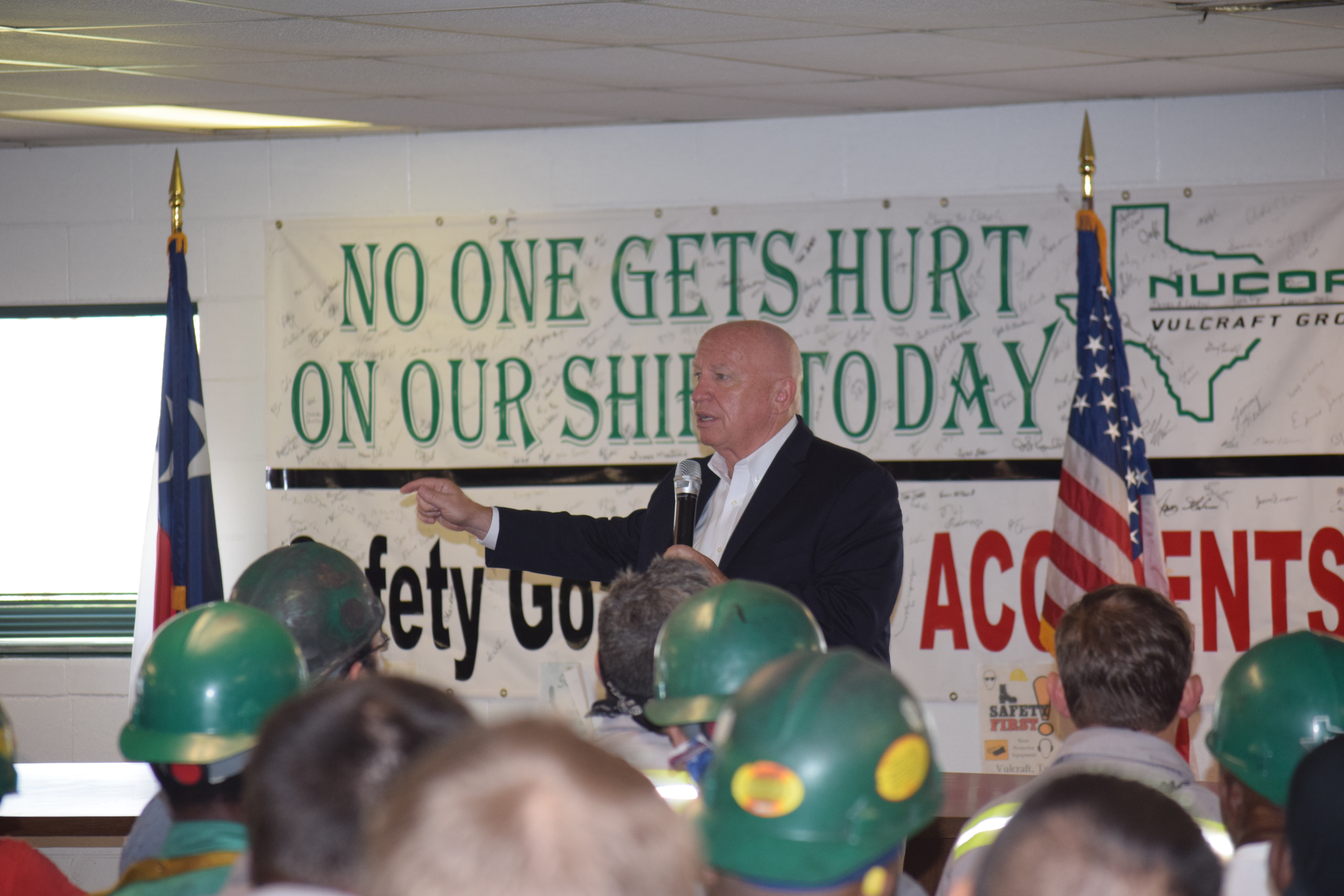 GRAPELAND – The employees of Vulcraft, a division of Nucor, welcomed U.S. Congressman Kevin Brady (R-TX 8) to the Grapeland steel plant on Monday, June 19 for a town hall meeting. Brady is the Chairman of the House Ways and Means Committee and represents a large portion of the East Texas area, including Houston County, in Washington, D.C.

Following an introduction from Vulcraft General Manager Kevin Barksdale, Brady expressed his appreciation to those in attendance for the warm reception he was given.

As he began, the congressman informed the employees of the steel plant he had maintained his residence in Texas and commuted to Washington on a weekly basis so that he could stay “… close to the people he represents and that’s you.”

Brady recalled his days before entering the world of politics when he worked as a sheet metal fabricator and said when he walked through the Vulcraft facility before the start of the town hall, it brought back several fond memories.

One of the ways he was attempting to do that, Brady explained, was by working with President Donald Trump to remove some of the red tape and regulations which prevented industries – like the steel industry – from expanding.

Other areas Brady said he was focused on included the repeal of Obamacare and tax reform legislation.

“The tax code we have today in America is costly. It is complex. It is unfair and it is getting worse. It has grown three times in size since President Reagan last reformed the tax code, 30 some odd years ago,” he said.

The congressman indicated he hoped to develop a new tax code based on growth as opposed to just taking money from the average taxpayer. By doing so, Brady said this would hopefully bring the United States economy back to the top of competitive levels with foreign competition.

Brady explained his tax reform plan consisted of three key elements. The first of these elements was a tax cut for businesses “… to the lowest rates in modern history and a redesign of the tax code where companies could compete anywhere in the world.” 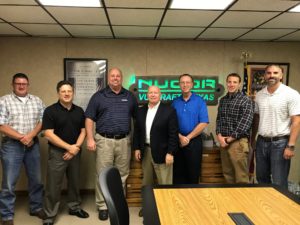 The second element concerned tax reform for families and individuals.

“We want to make the tax code so simple and so fair that nine out of ten Americans can file their taxes using a simple postcard system,” he said.

Because of the simplicity of the proposed system, Brady said the third element to the tax plan involved busting up the IRS in an attempt to make the organization more user friendly to the average taxpayer.

As he continued, Brady said one of the components needed to help make this plan work is what he termed a border adjustment tax, a value-added tax levied on imported goods. While acknowledging the idea has created some controversy, he stressed it would help increase revenues, keep corporate tax rates at lower levels and whittle away trade deficits.

At the conclusion of the Q&A, a different subject area was broached.

Brady was asked if he felt the partisan rhetoric in Washington might be toned down somewhat following the incident in Alexandria, Va. last week, where Rep. Steve Scalise (R-La.) and with four others were shot during a congressional baseball practice.

“I sure hope so,” he said. “Last week, from that perspective, was a good week in that it shocked everyone up there (in Washington). People started toning down their remarks and both parties came together for the ball game. It was very patriotic, inspirational and the way things out to be. Enough is enough. This rhetoric is getting out of control. It certainly influenced this guy (the gunman).”

The congressman was further asked if this current spirit of congressional unity could be sustained.

“That is a worry – that this will stay in place until the August (congressional) break and then all the ugliness will start again. I don’t know what the answer is except that I do know when both parties come together to solve problems, it is almost always a good thing. Whether it’s making the country more secure, lowering taxes or saving Social Security or Medicare, it’s going to take both parties. No one party can do it all,” he said.

Another policy area discussed after the meeting concerned health care.

In regard to President Trump’s comment that the American Health Care Act of 2017 (AHCA) was “mean,” Brady chuckled and said he hoped the president was misunderstood and added he hoped he meant “amenable.”

“The senate needs to do its very best job. We gave them what I believe is a very good bill. It makes healthcare more affordable and takes the control out of Washington and gives it back to the states. It supports the free market, so there are more choices. Right now, there are no choices and they are all expensive in Obamacare. It’s not working and it’s expensive. Texas has lost nine insurers. I’m hoping the senate will do its very best to get this bill back to us this summer so we can get it to the president,” Brady said.

The congressman also indicated pre-existing conditions would be guaranteed under the AHCA.