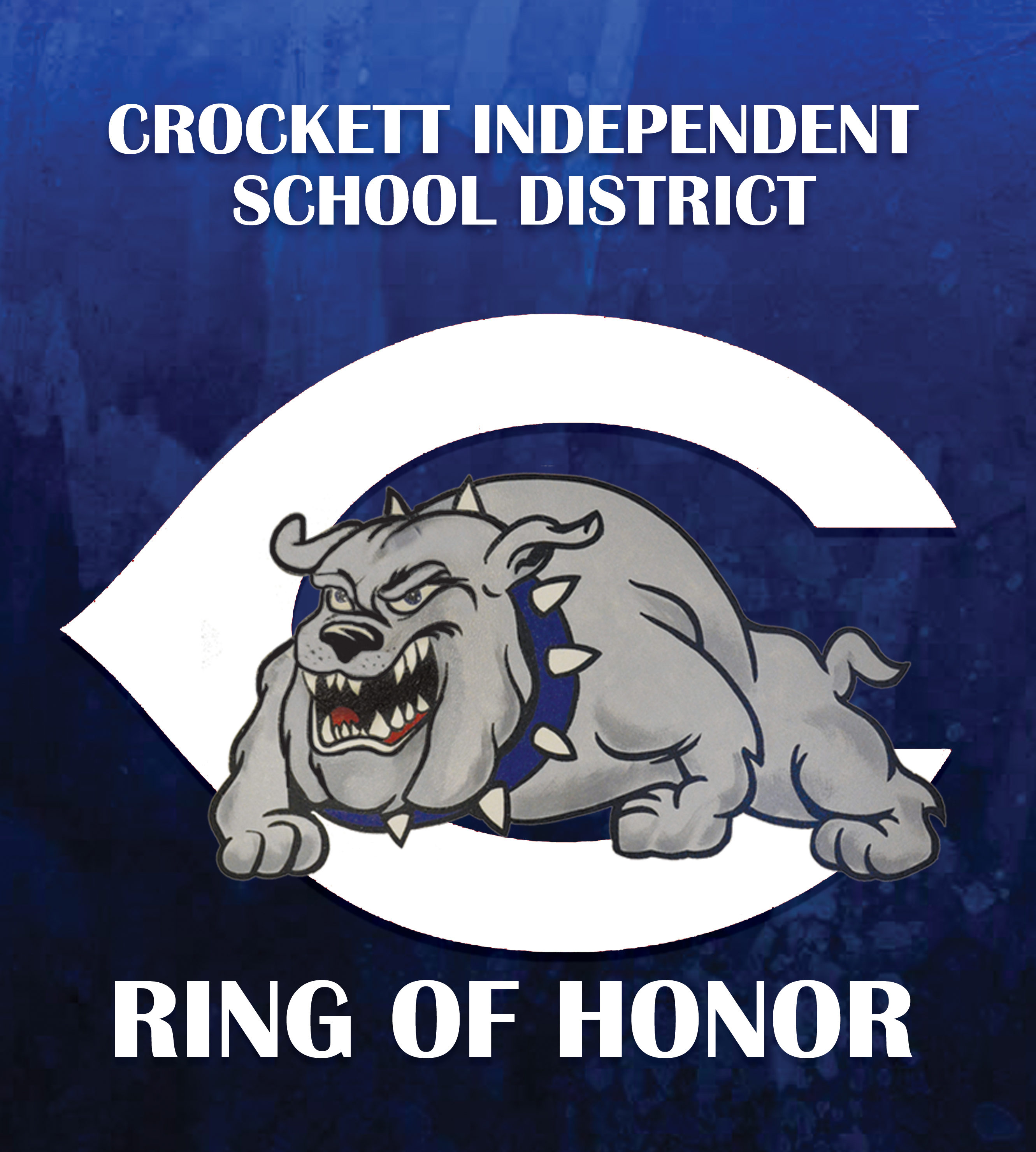 CROCKETT – The Crockett Independent School District will induct five new members into an exclusive fraternity on Friday, Oct. 21. This fraternity includes doctors, lawyers, professional athletes, teachers, coaches, mayors, city council members, a congressman and just plain old folks who made a significant contribution to the betterment of the school system in Crockett. It is the Ring of Honor.

A prepared statement from Crockett ISD Superintendent Terry Myers read, “On behalf of the Board of Trustees, Administration and Staff, I want to extend a hearty welcome and congratulations on your being selected for the Crockett ISD Ring of Honor. You were selected for contributions to the Crockett School Communities and you are part of a rich legacy. You demonstrate a road map to success for the young people of today. The Ring of Honor is a blend of age and race. It represents the hard work as well as the extra effort it takes to reach standards of excellence in your lives. Thanks to all of you for that effort. There is a process in place to add up to five new names annually to the Ring of Honor. An announcement will be made concerning this in April 2017. This announcement will be the starting the application process for the selection of the 2017 honorees. We at Crockett ISD wish you and/or your family representatives the very best in the future. God bless you all.”

B.I. Bridgwater, a 1974 graduate of Crockett High School credits playing sports at Crockett High School and his coach Ge
ne Hampton with inspiring him to believe every goal in his life was attainable provided he was prepared and focused. After high school Mr. Bridgwater attended East Central University in Ada, Okla. on a football scholarship. While in Crockett Mr. Bridgwater played quarterback, but switched to outside linebacker/defensive end in 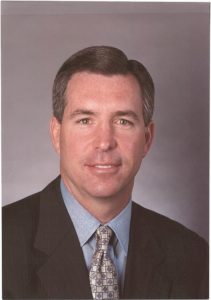 college where he played with two players who went on to be impact players in the NFL, Mark Gastineau of the New York Jets and Clifford Thrift of the Chicago Bears Super Bowl winning team. While in college Mr. Bridgewater was named to the all-conference football team. He also was elected president of the student body and helped establish a Fellowship of Christian Athletes chapter on the campus. Mr. Bridgwater met his wife Twyla while attending ECU; they were married in the ECU chapel. Their marriage produced a son, Brandon, daughter-in-law Cherise, and their granddaughter Samantha. After college Mr. Bridgwater’s focus turned to church, family and his business career. Mr. Bridgwater retired in 2004 having held titles of controller, vice president, chief operating officer and president with three different multi-billion dollar global corporations. Following retirement Mr. Bridgwater was diagnosed with early onset Alzheimer’s. With his family’s support he focused on fighting the disease both personally and publicly. He has served on the national board of directors for the Alzheimer’s Association and also as a spokesman for the group. Former U.S. Speaker of the House asked Mr. Bridgwater to assist him in coordinating with health care agencies to optimize Alzheimer’s research and care. His faith, family and Crockett community have provided the foundation to address the opportunities and challenges he has faced in life.  He believes the apostle Paul when he said in Philippians 4:13, “I can do all things through Christ who strengthens me.”

Carlton Duncan graduated from Crockett High School in 1978 after a stellar athletic career where he excelled at football and track. Mr. Duncan was the defensive athlete of the week in football in 1976, and also defensive player of the year that year. He went to state in track and field in the 100-meter and also the 220-relay. Football became a passion for Mr. Duncan and his abilities earned him a tryout for the Dallas Cowboys. While he did not make the team, he still count 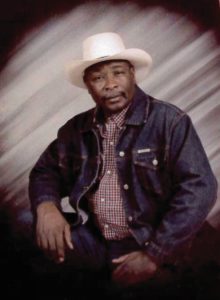 s it an honor to even be considered. He came within two points in the teams cumulative scoring of being a member of the Dallas Cowboys. After Mr. Duncan graduated he embarked on a 30-year career as a truck driver. While football was his passion he considered it the second greatest love of his life. His life revolved around his family — his wife and four daughters — as he worked diligently to provide a home for them and to meet their needs. Mr. Duncan is considered a man of great moral fiber, a trait he exhibited on the field of play and also in life. He is a model of hard work, honesty, modesty and integrity. He also believes in giving back to the community as he has worked with Special Olympics, serving the role as a coach to special-needs children. The children Mr. Duncan has mentored and coached over the years carry on his legacy, as his first grandchild played football for Crockett High School, helping Mr. Duncan to once again be a part of football glory days of the school he loves so much.

Jim Mattox, a 1971 graduate of Crockett High School, loved his school and his hometown. He played football in junior high and high school for Crockett, where he was a four-year varsity lettermen, even starting his freshman year. His work ethic earned him the respect of his fellow students along with his teachers and coaches. This was a quality he carried throughout his life. He made all district linebacker his junior and senior years. He also served as team captain his senior year. 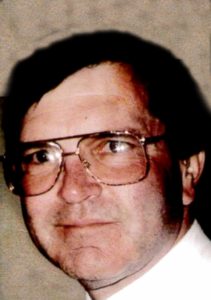 His former coach, Monte Jack Driskell, said Mr. Mattox was one of only three freshmen to make varsity during his tenure coaching. “He was a true team leader,” coach Driskell said, “always more concerned about the success of the team rather than his personal success.” Along with football Mr. Mattox also participated in track and field, and FFA. He was freshmen class president and class favorite. After his high school days Mr. Mattox attended Tyler Junior College and then lived in Nederland for a time before moving back to his beloved home of Crockett. Mr. Mattox served as director of the First National Bank of Crockett. He also worked for Northcutt Woodworks. He and his wife, Jane, owned and operated Dairy Queen for many years, with Dairy Queen, he served as president of the company and oversaw a 50-chain operation until his death in 1998. During these years Mr. Mattox was deeply involved with the Children’s Miracle Network, continuing his desire to put others before himself. He worked tirelessly to raise money through local telethons for the benefit of sick children. Personally, he was a loving husband, father and mentor to many local young people who now are adults in Crockett and surrounding communities.

Dr. John A. McCall, a 1971 graduate from Crockett High School, played football for seven years and ran track throughout his junior and high school years. He attended Sam Houston State University and The University of Houston where he earned his Doctor of Optometry, and also was selected as the Student Texas Optometric Association preside 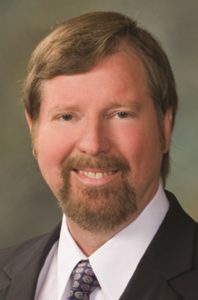 nt in 1976. His impact on the field of optometry cannot be overstated as he has been given many awards, including the Young Optometrist of the Year in Texas; Optometrist of the Year in Texas; president of the Texas Optometric Association; University of Houston outstanding alumni of the year; Distinguished Service Award by the Texas Optometric Association and the Bill Pittman Leadership Award by the University of Houston College of Optometry. Dr. McCall also is an eye surgeon. Dr. McCall founded the Board Certification for Optometry and served as the first president of the American Board, which certifies doctors for board certification. Plus, he is an editorial board member of the Primary Care Optometry News and a contributing writer. He is the co-founder of the largest network of doctors in the world, Vision Source, with national headquarters in Kingwood, Texas. He served as a city councilman, mayor of Crockett and helped oversee the construction of the Crockett Civic Center and Porth Rodeo Arena and Crockett City Hall. He is the former president of the Crockett Jaycees and the Crockett Rotary Club. Dr. McCall owns Crockett Eye Clinic along with his father Dr. John A. McCall Sr. Dr. McCall has four children, Lyndsey, Scott, Haley and Matthew. He also has three grandchildren. When asked about his greatest accomplishment recently he answered, “Being a good father to my four children is my greatest accomplishment and that is what I am most proud of.”

Rodney Shaver is the Senior Operations Manager at Turner Industries LLC in Pasadena with more than 39 years of experience in the industry. Mr. Shaver graduated from Crockett High School in 1975. After graduation Mr. Shaver began his working career with Brown & Root, Inc., working his way up through the comp 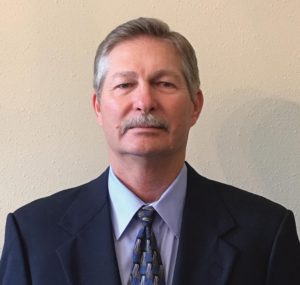 any, eventually being promoted to the role of general manager of the services division for Kellogg Brown & Root LLC, specializing in maintenance, turnarounds and project controls in the United States and internationally for the refining and chemical industries. He retired from the company after 34 years of service. From 2005 to 2008, Mr. Shaver was co-owner of Turnaround Group, Inc. a project controls specialty company supplying project control professionals performing scheduling, cost management, turnaround coordinators and turnaround managers for the refining and chemical industries. Kellogg Brown & Root purchased the Turnaround Group in 2008, allowing Mr. Shaver to return to his position as gene
ral manager. Currently Mr. Shaver leads the industrial services division at Turner Industries where he oversees 1,800 employees providing maintenance and construction services for the refinery and chemical business sectors. He is an active member of the Society of Maintenances and Reliability Professionals and is on the board of directors as treasurer. In 1986 Mr. Shaver attended the Golf Academy of the South, getting his associates degree in business and started a career in golf. From 1988 through 1990 he served as an assistant PGA professional at Onion Creek Country Club in Austin and at Whitewater Creek Country Club in Fayetteville, Ga. Mr. Shaver and his wife Barbara have been married for 25 years and live in Conroe. He has a step-son and two grandchildren.