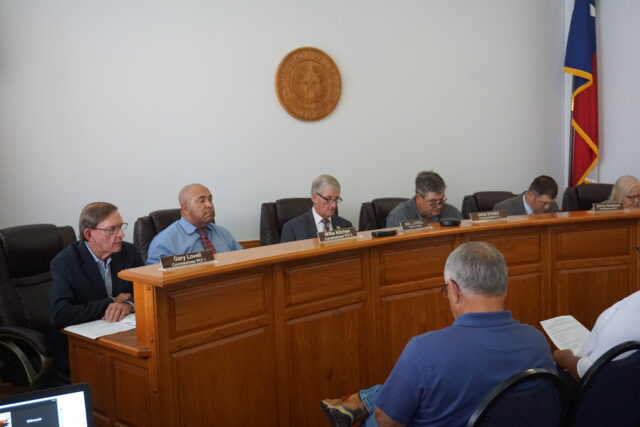 HOUSTON COUNTY – The Houston County Commissioners Court met Tuesday, Sept. 13 to discuss budgets for the new fiscal year and to vote on a proposal to lower taxes in the county.

After approving to pay bills and accept reports from various county entities, the commissioners approved a six month raise for two dispatchers and one jailer at the Houston County Sheriff’s Office.

The court also approved upcoming events from the Hotel Occupancy Tax Fund for the Crockett Fiddlers’ Festival, the Piney Woods Fine Arts Association concert featuring Cory Morrow and an event including Ariel Hutchins at The Loft in Crockett.

The court has for several years taken 15% of its Secure Rural Schools and Community Self Determination Grant money and set it aside to use in areas with forests within the county. The court discussed all of the red-tape and restrictions that come with this money and voted to use that money to fund other projects in Houston County – not tied necessarily to forests.

Houston County Elections Administrator Cynthia Lum explained to the court how moving the times for residents to vote early would help many vote after work. Instead of early voting being available from 8 a.m-5 p.m., Lum suggested to change the times to 9 a.m.-6 p.m. She told the court this would allow more people to vote after work. This was approved unanimously.

Lum also sought the court’s approval to open additional branches in the county for early voting. These were approved and will be opened in Lovelady, Grapeland and Kennard.

In the budget workshop portion of the meeting, the budget for the new fiscal year beginning Oct. 1 was approved.

The new tax rate was also unanimously approved. The new rate will be $0.4747, a decrease of $0.54 per hundred dollars of appraised value.

With appraisals running higher, even with the tax decrease, the county stands to increase its property tax revenue by over 5% in the coming fiscal year.