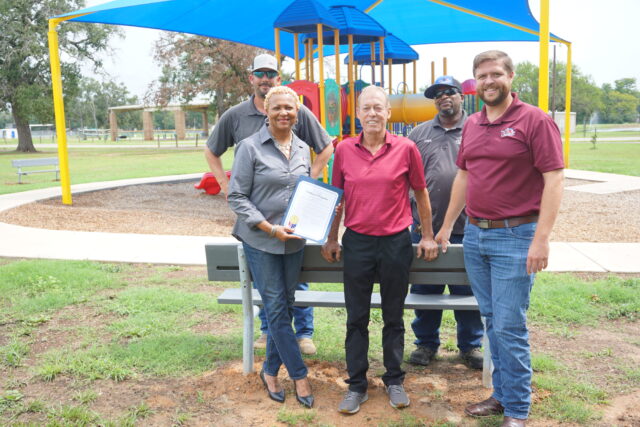 CROCKETT – Crockett Mayor Dr. Ianthia Fisher was on hand to present a certificate of thanks for a grant from the Crockett Elks Lodge for a $3,000 donation used to install four benches at the playground area of Davy Crockett Memorial Park.

Dean Anderson is the District Chairman  and Chairman for Crockett Elks Lodge #1729. He received on behalf of the Elks a certificate of recognition from the City of Crockett stating in part:

“WHEREAS, the Crockett Elks Lodge #1729 has contributed greatly to the community of Crockett, and has been a friend of the citizens and City of Crockett;

and WHEREAS, this organization was founded in Crockett in 1947 and whose

members comprised or many wonderful citizens of our city; and WHEREAS, since its inception, the Crockett Elks Lodge #1729 has been very influential in promoting good for the community; including its most recent grant contribution which provides benches within our Davy Crockett Memorial Park. NOW, THEREFORE, it is an honor and a pleasure to present this

contributions this organization has made and extending our heartfelt gratitude for their service.”

The certificate was signed by the mayor.

Anderson explained that it took three months to receive the benches given some of the supply chain issues in the world. He was proud of the work the Elks do in the community.

“We have some grants through the Elks National Foundation. We move the donations around between the fire department, emergency management, police department,” Anderson explained. “This is the second time we have worked directly with the City.”

Fisher and Crockett City Manager John Angerstein were busy inspecting the benches and many of the other improvements at the park.

“I am so excited looking at this new equipment donated by the Elks,” Mayor Fisher said. “We are all excited that the community has come together, working together and they continue to bless us.”

Elks Lodges were founded in 1868 in New York by English immigrant Charles Algernon Sidney Vivian. Elks serve their communities by making donations, helping veterans and engaging in many other works for the good of their community.

Fisher is happy with this next step, but said it is only a good start to what is still to come.

“We’re not through yet, you just wait!” Fisher said. “You are looking at the beginning. We have a pool in the making on the other side of the park. We have a splash pad up; many wonderful things are coming. I don’t want to brag, but you know, we have some awesome people around here and they do some awesome things.”