LATEXO –  Houston County schools have taken many measures to ensure the safety of both children and staff at local schools. Armed staff, new door policies, restricting entrances – and in some districts – adding an actual school district police station to the campus.

A memorandum of understanding was signed between Houston County and the Latexo Independent School District (LISD) to form their own police department to patrol the campuses. The school district hired a new police chief for the department who is a well known figure in Houston County law enforcement.

Ryan Martin won’t officially start the job for another few days, but he is already working on getting all the policies and procedures in place for the new department. Martin is currently working as a Sergeant in the Angelina County sheriff’s office. He is most well known for his time working in Houston County.

“It was a long campaign,” Martin said. “It ended up in a run-off and Hargrove ended up ultimately winning. And I think he’s doing a good job and we are still friends. It didn’t break my heart not to win – I figured it was just God’s plan.”

Martin took a job with the Angelina County Sheriff’s Office in Lufkin as an investigator. While there he received special training to serve on the Sheriff’s Response Team.

“We train more for tactical situations,” Martin explained. “We train with weapons that most patrol officers don’t train with as much. I am a sniper on our team and I’ve been to a sniper school. We also do a lot of training on building entry and breaching techniques to get into locked doors.”

Hoping these specialized skills will never be needed, Latexo ISD Superintendent Michael Woodard is nonetheless glad to have someone with Martin’s training heading up the new department.

“We had several good candidates, but Martin rose above everybody else,” Woodard said. “We’re glad to get him on board; we are excited.”

Martin was busy inspecting a patrol unit he will soon use to travel from campus to campus especially during pick-up and drop-off times. He is working on the police department policies at the same time. All the details must be worked out: patrol areas, use of force policies. Then it must be approved by both the school board and Houston County authorities.

Martin plans to spend most of the day patrolling the Latexo campuses on foot – especially in the beginning – to get to know the kids and the routines. Martin is looking forward to bringing his training back home to Houston County.

“You know it feels really good. Just walking around today I have seen a lot of people that I know,” Martin noted. “People I remember and I haven’t seen in years. I love the guys I work with in Angelina county, but Houston County is home and I am glad to be back.”

Martin said he and other law enforcement learned several key lessons from the Uvalde tragedy they plan to put into place should the need arise. 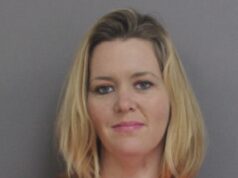