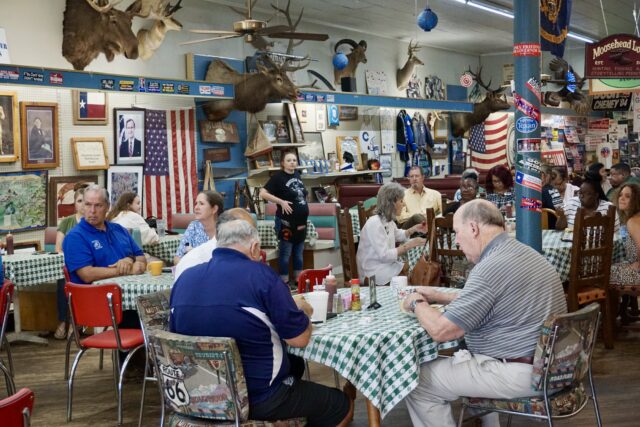 CROCKETT – The monthly mid-morning coffee event for July was held Thursday July 21 at the Moosehead Restaurant in downtown Crockett. The events are held the third Thursday of each month and rotate the location among Chamber members.

Liza Clark, the Executive Director for the chamber says these meetings give local businesses a chance to network, both amongst themselves, and in the greater community.

“It’s a chance for members and non-members to network and to find out what’s going on in the community with businesses and other organizations,” Clark explained. “It really gives business owners an opportunity to showcase who they are and what they do.”

Clark started the meeting by reminding everyone that Christmas in Crockett is only 121 days away, which seems like a long time, but will be here soon. She also announced the chamber’s new downtown office will be ready soon. The new office will be located at 507 East Houston Ave.

Speakers at the mid-morning coffee included Joni Clonts, owner of the Moosehead who welcomed attendees with fresh coffee, bagels, eggs, fresh fruit and other goodies. The line to the buffet was filled with people meeting for the first time, as well as old friends catching up.

Ann Walker Executive Director of the Piney Woods Fine Arts Association (PWFAA) told the crowd the PWFAA were not quite ready to release the lineup for the new season. She said there is one contract left to be concluded with a big name. The PWFAA is also waiting to confirm a date for Mark Chestnutt, possibly in October. Walker said the new season is set to begin Friday September 30 with Diamond Rio.

All present were invited to speak about their businesses and activities, and Kevin “KJ” Johnson and Mike McCreight spoke to the attendees; both are candidates for the Justice of the Peace Precinct 1 position.

McCreight told the members about his long experience in Houston County.

“I have worked for the sheriff’s office for 19 years,” McCreight explained. “I was actually late here this morning because I was delivering water and drinks donated by Houston County residents to our firefighters.”

As the attendees finished their breakfasts and those who wanted to speak had had their say, the chamber proceeded with door prizes donated by chamber members.

The coffee events are open to all, and one does not have to own a business to attend or join the chamber. For example, there were several retired teachers who were present at the Thursday event.