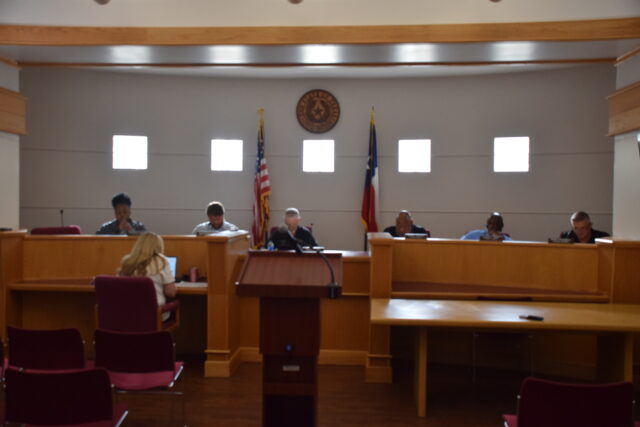 CROCKETT – It’s budget time again in the City of Crockett and on Monday morning, July 18 the Crockett City Council took the next step in designing the municipality’s financial blueprint for Fiscal Year (FY) 2023.

One of the main areas the council members emphasized was the need to address employee pay.

Before the council tackled the pay raise matter, City Administrator John Angerstein explained some of the budget constraints the city faced as the FY 2023 budget was cobbled together.

“We have had some increases and decreases throughout our budget in terms of revenue and expenses. One of these is our property tax revenue. I am projecting a $49,000 increase on property tax revenue. The reason I’m doing that is because I have to cap it. We can not bring in more than 3.5% in additional revenue, according to state guidelines. However, our property values have increased by $37 million which would signify much greater revenue in property taxes. However, on the flip side, we would have to decrease property tax rates in order that people wouldn’t pay more taxes than they should. If we kept our rate at the same level, we would bring in a little more than $200,000 in revenue. Therefore, we are decreasing our property tax rate so that we don’t bring in any more than the cap of 3.5%,” he said.

The city administrator also said sales tax revenue had been growing steadily over the year but cautioned it could plateau. He explained the increase in sales tax revenue was due in large part to state mandates which required sales tax to be paid at the place where an item was purchased, including online purchases.

On the expense side of the budget, Angerstein said fuel expenses had gone up by $68,000, health insurance costs had risen by 7.8% – even with an increase in deductibles, workers compensation costs had increased, water costs had risen by two percent to go along with a $90,000 loan for new water lines and Piney Woods Sanitation had requested a 6% increase to help offset fuel costs and the rise in the Consumer Price Index (CPI).

After Angerstein explained several of the increases faced by the city, Police Chief Clayton Smith addressed the council about pay increases for his department.

Smith explained one of the reasons his department was facing difficulty in recruiting and retaining officers was because of pay. He explained law enforcement officials had several other agencies from which to choose and cited examples of how DPS and even the Grapeland Police Department paid more to start out than CPD.

The police chief made an impassioned plea to the council for higher salaries, not just for his department but for all city workers. Following several minutes of discussion, the council seemed to agree.

Angerstein said one of the capital requests was to conduct a salary survey to see where the City of Crockett stood when compared to other cities of the same size.

One of the issues, the city administrator pointed out, would be how to raise the revenue to fund the pay increases. Angerstein indicated it would most likely require the matter being put before the voters in order to provide the necessary funds.

Further budgetary workshops will be held by the council before the FY 2023 budget is finalized and presented to the city leaders, as well as the public.

Prior to conducting the FY 2023 budget workshop, the council addressed several other city matters.

The meeting was called to order at 9 am by Mayor Pro Tem Mike Marsh – due to the absence of Crockett Mayor Dr. Ianthia Fisher who had a previously scheduled engagement.

The first order of business was the approval of the minutes from the June 21 council meeting and once the minutes were approved, Marsh moved the council into the reports portion of the session.

Crockett Police Chief Clayton Smith reported the police department received 462 calls for service during the month of June which resulted in 59 arrests. There were 276 traffic citations issued and 57 police reports filed.

Once the reports concluded, the city administrator asked the council to consider the approval of a resolution authorizing the submission of a Texas Community Development Block Grant Program application to the Texas Department of Agriculture for the fire, ambulance, and service truck (FAST) grant program.

“This resolution allows us to submit the grant we have been talking about. IT is for up to $750,000 towards a fire truck. We have the need and we presented this in our application. WE feel like we have a good chance of getting this grant. After this resolution, we will be able to submit it. For $750,000, our match would only be $15,930,” Angerstein said.

A motion was made, seconded and unanimously approved to approve the resolution.