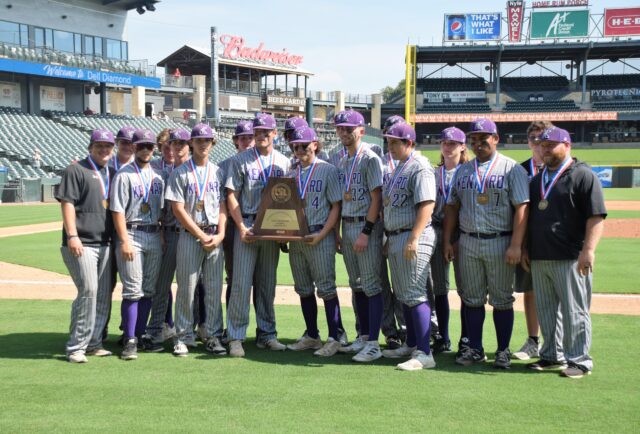 ROUND ROCK – The Kennard Tigers made a return trip to Round Rock this past Wednesday, June 8 to compete for the Class 1A State Championship. Last year, they made it to the title game before falling to the Fayetteville Lions, 6-4.

This year, they hoped to take that next step and bring the championship trophy home to Kennard. Before they could do that, they had to get through the State Semifinals. Standing in their way were the Nazareth Swifts.

Both teams came into the game evenly matched as the first six batters in each lineup were hitting above .300. Getting the start for Kennard was Dylan Cole (8-5), who had thrown a perfect game in the Regional Finals while his counterpart from Nazareth – Trent Gerber – was 12-0 on the season.

Something had to give and it happened in the opening frame as the Swifts loaded the bases with one out. Cole, however, pitched a gutsy game throughout and only gave up a single run in the potentially explosive first inning.

Unfortunately for the Tigers, that was all Nazareth would need as they hung on to win by a final score of 1-0.

On the flip side of the coin, Cole ran into trouble when he took the mound for Kennard. After fanning the Swifts’ lead-off batter – Luke Schulte – the Tigers’ pitcher gave up back-to-back singles to Carson Heiman and Gerber.

Tanner Birkenfeld was up next and hit a flare over third that landed just inside the foul line, to load the bases. Designated hitter Brett Young followed in the order and topped a Cole pitch that rolled 10 feet in front of the plate.

Cole charged the ball and managed to flip it to catcher Keyton Lumbreraz, but Heiman – who was running on the play – beat the throw and was called safe at home.

After that, Cole seemed to shake off the early inning jitters as he fanned Sterl Welps and forced Braden Bullard to ground into a 6-3 force at first to end the frame.

Lumbreraz led off the second inning with Tigers’ first hit of the contest as he singled through the left side of the infield. That was all Kennard could muster, however, as Ryan Pilkington struck out swinging while Caleb Alfred hit into a 4-6-3 double play to bring Nazareth in from the field.

The Swifts started the second inning off on a high note as Jack Welps singled to left center. With Will Young in the batter’s box, a passed ball moved J. Welps to second. Young would eventually strike out, bringing Schulte up to bat for the second time in as many innings.

This time Schulte connected off of Cole and sent a shot back to the mound. Cole was able to knock the ball down and when he did, J. Welps was caught in no-man’s land, between second and third. The pitcher threw to Adrian Montero at third who chased J. Welps back towards second, before he tossed the ball to Kulms who tagged the Nazareth baserunner for the second out. The run down seemed to kill the momentum the Swifts had as Cole popped up Heiman to end the inning.

A quiet third gave way to the fourth and with it came Kennard’s best chance at getting on the scoreboard. Kulms led off for the Tigers but grounded out to first. E. Dowdy was up next and reached on a throwing error. Cole singled to left to move E. Dowdy to second which gave Kennard runners at first and second, with only one out.

The Tigers were unable to take advantage of the situation, however, as both Lumbreraz and Pilkington struck out to end the Kennard threat.

After the first inning, Cole began to dominate the Nazareth hitters and he continued his mastery into the fourth. He got S. Welps to pop up to first, forced Bullard to ground out to short and then jammed J. Welps who tapped to Pilkington at first for the third out.

Equally as good, Gerber mowed down the Tigers in the top of the fifth. He got Caleb Alfred to ground out while Montero and Nick Farmer were both caught looking at strike three.

In the bottom of the inning, Kulms kept Kennard in the game with a pair of defensive gems. First, he was able to knock down a Young grounder that had double written all over it. A 4-6 groundout erased the Nazareth baserunner and was followed by Heiman pop-up to first.

The next batter was Gerber and he hit a rocket between third and short. Kulms ranged to his right, however, and made a diving stop of the ball. He popped to his feet and fired a bullet to Pilkington at first for the final out of the fifth and perhaps the defensive play of the game.

The momentum seemed to shift to the Tigers’ side of the field after the web gem, but Gerber simply would not give an inch. He fanned Nikolas Dowdy and then got Kulms to ground out. A throwing error allowed E, Dowdy to reach first base safely, but Cole flew out to right to end the top of the sixth.

Cole returned to the mound in the bottom of the frame and made quick work of the Swifts. He fanned Birkenfeld on four pitches and then caught Young looking at strike three. A single by S. Welps went nowhere as Bullard flew out to left to bring the Tigers in from the field.

Down to their last three outs, Lumbreraz led off for Kennard and popped up to second. Pilkington followed with a single to right, giving the Tigers a glimmer of hope. It was simply not meant to be, however, as both Alfred and Montero struck out to end the game, handing Nazareth the 1-0 win.

At the plate for the Tigers, Cole, Lumbreraz and Pilkington were all 1-3.

The Swifts were led at the dish by Young who was 1-3 with an RBI.

While it’s certainly not the way the Kennard squad wanted to end their stay in Round Rock, the young men should be congratulated on a fine season as well as making it to the Class 1A State Tournament I back-to-back years.

Of note, Nazareth lost the Class 1A Championship Game to the D’Hanis Cowboys by a score of 4-0 on Thursday.