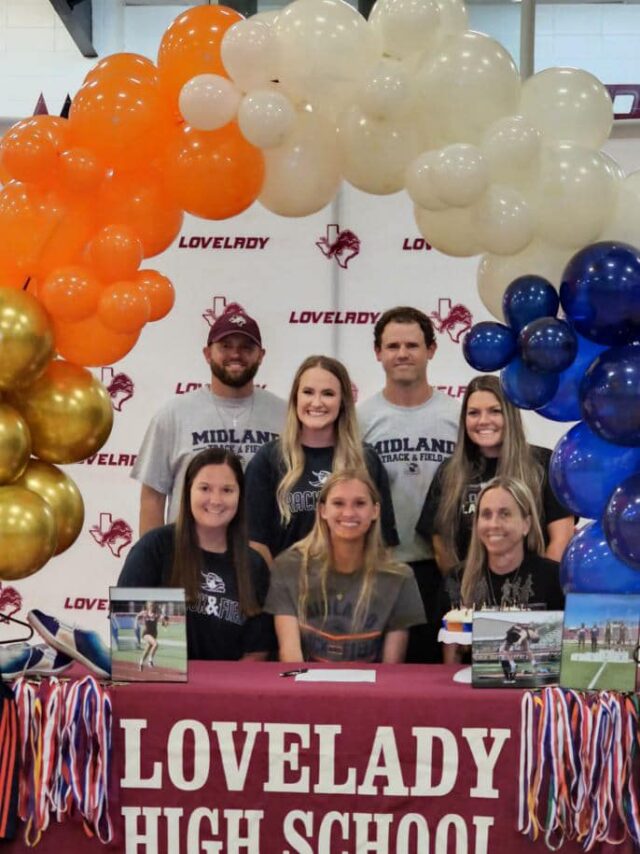 LOVELADY – This fall, Lovelady Lady Lion Shyanne Pipkin will be trading in the maroon and white of Lovelady for the orange and blue of the Midland University Warriors in Nebraska as she signed her National Letter of Intent on Tuesday, May 17.

Following all the congratulatory hugs and handshakes, along with what must have seemed like a thousand photos, Shyanne spoke with The Messenger about taking her talents in the track and field world to the Cornhusker State.

“They actually found me back in November, during cross country season. They sent an e-mail saying they would love for me to join their team and that I would be a great asset. They gave me a number to contact and they recruited me for the high jump,” Shyanne said.

Her best height so far has been 5’-3” but said the Midland coaches believed she could easily achieve 5’-8”.

As far as when she realized she might have a shot at going some where in track, Shyanne said it wasn’t until she was first contacted that the belief began to take shape.

Jacksonville College had contacted her about running cross country and track along with Graceland University in Iowa.

“I was contacted about basketball by Oklahoma Wesleyan. I also went to Ranger College and practiced with everyone,” she said.

When asked why she chose the high jump over basketball, Shyanne said it was a tough decision.

“It was really hard, actually. I cried having to make this decision. I didn’t want to have to let go of basketball but I know I can play a pick-up game, but it’s not the same. It was really hard to choose. It really came down to the campuses and which one I felt more at home with,” she said.

Shyanne said the Midland University community reminded her of Huntsville in a way.

Concerning what she would tell her Lovelady teammates as to how to get to the next level, Shyanne said, “Dedication can get you anything. As long as you try your hardest and know that you can do it, no matter what, it’s going to be alright in the end. Also, follow your heart.”

Before the conversation wrapped up, Shyanne said she would like to thank all of her coaches at Lovelady, her mom and her big brother.

From all of us at The Messenger Sports, congratulations on your signing and best of luck in your future endeavors.