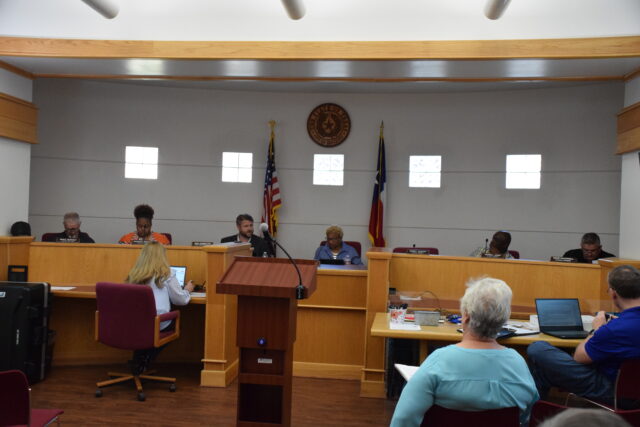 CROCKETT – The Crockett City Council met in a called meeting on Monday, May 2 to consider the Fiscal Year (FY) 2023 budget planning calendar and to consider approval of a resolution authorizing an application for financial assistance from the state infrastructure bank, pertaining to road repair.

Once the minutes from the April 18 meeting had been approved, City Administrator John Angerstein opened a discussion on the budget calendar.

“We realize in this coming year, we already have several projects which are being queued and in progress. We want to continue the completion of those projects while keeping our focus on our streets, water and sewer upgrades; while making repairs and upgrades to maintain current operational levels,” he said.

Angerstein added there might be an increase in revenue based on what he had seen from the Houston County Appraisal District, due in part to several new businesses. He went on to say there might even be a small increase in sales tax revenues as well.

“We are looking at going into this next year with little to no – hopefully no – increases in the tax rates. If anything, we may be able to reduce our tax rates,” the city administrator said.

The following dates were approved by the council for the FY 23 Budgetary Process:

The next agenda item pertained to the approval of a resolution authorizing the filing of an application for financial assistance from the state infrastructure bank (SIB).

Angerstein explained the city of Crockett was exploring financial options to repair 11 streets – and possibly 14 – within the city confines.

A description of the project was provided prior to the meeting and sates, “It is the intent of the City of Crockett to rehabilitate certain major collector and major arterial streets within the city limits of Crockett that currently are in a substandard condition. Some of the streets that involve reconstruction will be by necessity have their existing water mains relocated from underneath the existing paved surfaces in order to preserve the longevity of the streets. The streets are identified below without any order of priority.”

“We are asking for $6 million. As we get (departmental) budgets back in, we can add roads or remove roads. We will have to come back to council for clarification as far as the removal of any roads,” Angerstein said.

The city administrator then yielded the floor to Ben Rosenberg with US Capital Advisors who explained the repayment plan.

Rosenberg elaborated since the city began seriously looking at the project, interest rates had risen from 1.7 to 2.7 percent. However, he clarified the city would receive a 95 percent reduction in the interest rate under the SIB program.

“As soon as we get the application,” he said, “we can lock in that rate. So, while interest rates are going up, the effective rate (the city would pay) is 0.13 percent. That’s almost zero interest.”

He added the loan would be secured by property taxes and the tax rate would perhaps only go up by approximately one cent, depending on the final scope of the project “… and you get $6 million worth of roads.”

Following his presentation, the council voted to approve the resolution to file the application.

Prior to the aforementioned items, Crockett residents John Jenkins and Diane Rhone addressed the council in the public forum portion of the meeting.

Jenkins voiced his concern about a lack of communication between city leaders and business owners as well as the response time of the Crockett Fired Department when a vehicle caught fire on S. 4th St.

Rhone spoke about the attendance record of Councilman Darrell Jones to the city council meetings. She indicated Jones had only attended three of nine meetings held by the council from November of 2021 until the May 2 meeting. Jones was in attendance for the Monday evening meeting.

She further alleged Jones was currently residing in Alabama and urged him to resign from his council position.

Council members are not allowed to respond to comments made during the public forum.