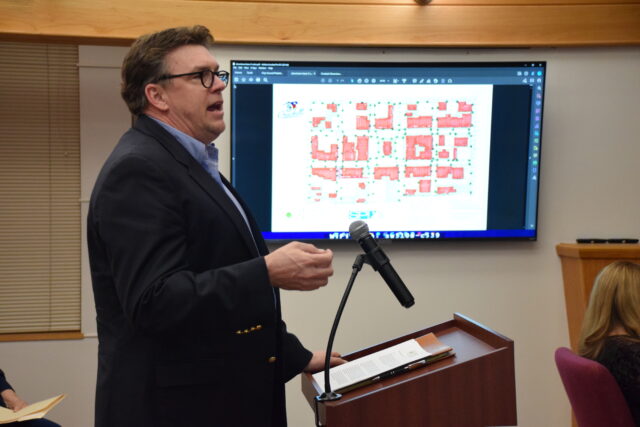 CROCKETT – The City of Crockett took another step forward in its quest to become a master planned community during a meeting of the City Council held on Monday evening, March 7.

Wade Thomas, a board member of the city’s Planning and Zoning Commission, addressed the council about proposed text changes to Section 201.7 C-3 City Center Shopping District Code of Ordinances.

Joining Thomas in the presentation was Mark Priestner of Planning Concepts, an urban design company which specializes in assisting municipalities with urban and land use planning initiatives.

“I would like to thank the mayor and the council to allow the (P&Z) commission to contract the services of Mr. Priestner for this project. His expertise in the area of urban planning has been invaluable to the board. The proposed changes have been reviewed by the P&Z Commission. The commission feels these changes are in the best interest of the City of Crockett and the revitalization/resurgence of the downtown area,” Thomas said.

Once Thomas concluded, Priestner addressed the city leaders saying everyone he has worked with has been very passionate and agreeable about the proposed project.

“As we started looking at it,” Priestner said, “the biggest issues were parking circulation for traffic and vehicles and looking at overall land uses.”

He added the city had great “building stock” with a large amount of face-to-face structures.

“Crockett is one of those towns that developed well-before WWII but is accommodating vehicle traffic that is post-WWII. We changed from a walkable community to a drivable community but didn’t have the room to do it,” he said.

“What we are trying to do with the downtown,” he continued, “is make it less intense. We want more restaurant use, office use and residential – a key component of the downtown. The character of the downtown is in the cluster of buildings, not a single building.”

Priestner went on to say proposed changes he had provided the council with would encourage more walkability and livability in the downtown area.

Prior to the text amendment discussion, Police Chief Clayton Smith provide the council with his department’s racial profiling report for 2021.

Crockett ISD Adopts Changes to Calendar for 2020-2021 School Year
An Interview With Garry Peterson of The Guess Who; Band to Perform Feb. 24 in Crockett
Area COVID-19 Update – Jan. 19