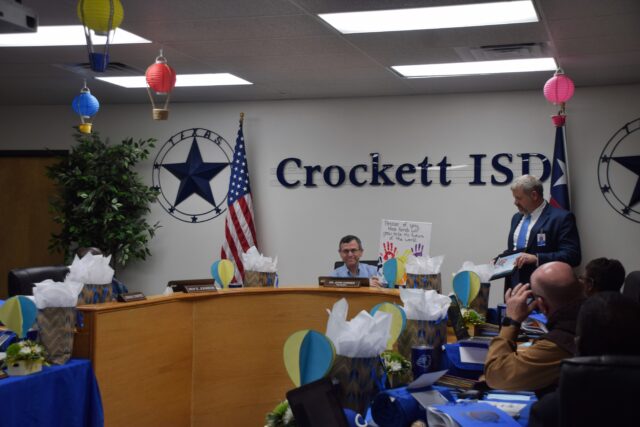 CROCKETT – January is School Board Recognition Month across the state of Texas and during a regularly scheduled board meeting, held on Monday, Jan. 24, the Crockett Independent School District administration took time to recognize those who serve on the district’s Board of Trustees.

Before the trustee recognition, CISD Superintendent John Emerich reported he had been meeting with various community groups throughout Crockett.

“One of those is a group of ministers. They agreed to come to our board meetings and lead the prayer before the meeting. This is the board’s meeting and the board has the prerogative to do that. Three of those members are here and Mr. (Leon) Wallace is going to do that. Mr. (Tim) Allen and Mr. (Reginald) Marshall are also members of that group and they are here for support,” the superintendent said.

Following the invocation by Pastor Wallace, Pastor Marshall expressed his support for the current administration and said it was his belief that stability was one of the keys to student success.

“Every change we make affects our children. When they have to start over in the learning process, trying to learn from a new teacher, a new coach or a new system – in my opinion – they take a step backwards,” he said.

As the meeting continued, Emerich commented, “As you are well aware, a board member does not get paid for the incredible amount of time that they spend. January, in the state of Texas, is designated as School Board Recognition Month. This year the theme TASB (Texas Association of School Boards) sent out is ‘Rising Above.’”

Emerich then yielded the floor to the individual campus principals who presented the board members with several tokens of their appreciation.

Once the recognition portion of the meeting concluded, Emerich informed the board the May 7 election was fast approaching.

The superintendent indicated districts one (currently held by Ansel Bradshaw) and six (currently held by Josh Crabtree) were up for election. With very little discussion, the election order as well as a joint agreement with the city of Crockett were approved.

The board then retired into executive session where they discussed the evaluation of and contract of the superintendent. When they returned to open session, a motion was made, seconded and approved to extend Emerich’s contract.

Following the contract extension, the trustees went back into executive session to discuss a Level III grievance. Once they returned from behind closed doors, it was determined the appeal would be denied.