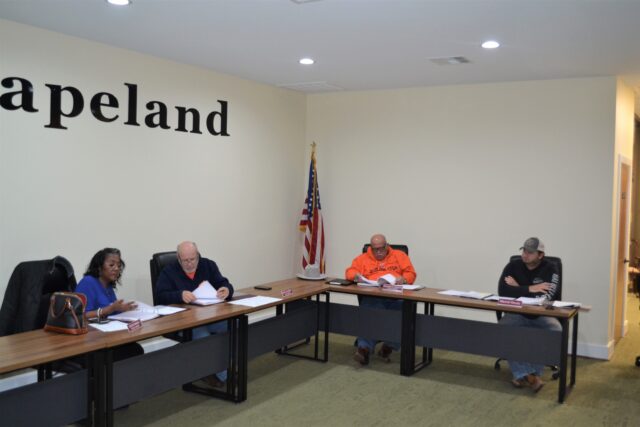 GRAPELAND – Grapeland City Council held a regular meeting on Tuesday, January 11 to discuss and act on a brief list of agenda items.

Departmental reports were the first order of business. City Superintendent Kevin Watts gave a favorable report for the water department, including outstanding results of a recent audit of the city’s wastewater facilities. Chief Thomas Shafer followed with the activity report for the Police Department.

During the Mayor’s FYI portion of the meeting, the council discussed the upcoming appointment of Grapeland Public Library Director Ashley Corns to the Building and Standards Commission. Also discussed was the need for an emergency runoff tank at the city’s wastewater plant. The city was recently denied a DETCOG grant for wastewater expansion, and the council discussed the possibility of a debt consolidation to facilitate a possible loan should the emergency expansion become necessary. Watts explained that the city was not denied due to not scoring high enough, but rather lost out to larger municipalities that were unable to keep their facilities in top shape as the City of Grapeland has done. “It’s unfortunate,” said Grapeland Mayor Mitchell Woody “but if we were to let the wastewater plant sit there and become non-compliant, we would probably be able to receive more grant money like the larger cities, but we’re not going to let that happen.”

Other agenda items discussed during the meeting: