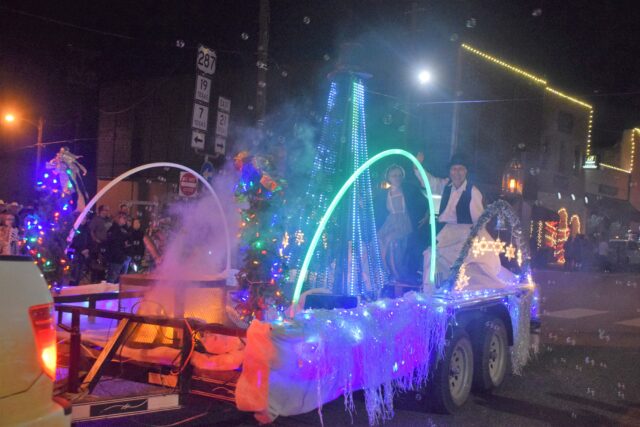 CROCKETT – With a waxing moon casting an amber glow over the city, the Christmas season kicked off in Crockett on Thursday evening, Nov. 18 with a parade sponsored by the Houston County Career Women.

The weather was perfect with a slight chill in the air, helping the parade participants make those in attendance feel like they were in a Winter Wonderland.

There were several Grinches lurking about – some were even riding in the parade – but that jolly old elf, Santa Claus, was able to work his magic and keep any inclement weather at bay as the parade cranked up just after 6 PM.

As the claxons of police and fire vehicles signaled the start of the parade, a battalion of first responders rolled by, followed by the Crockett High School Marching Band. The Grand Marshal of this year’s parade was Liza Clark, the Executive Director of the Crockett Area Chamber of Commerce.

Children and adults alike lined the courthouse square to catch a glimpse of the many fabulous floats, tricked out tractors and melodious marching bands.

A good-sized crowd helped welcome the well over 50 entrants in this year’s parade and without the masks from last year’s parade, the smiles from the many participants and parade-goers could be seen from the streets of Crockett all the way to the North Pole as the Christmas Spirit shined brightly last Thursday.

Happy Holidays and Merry Christmas from all of us at The Messenger Newspaper.