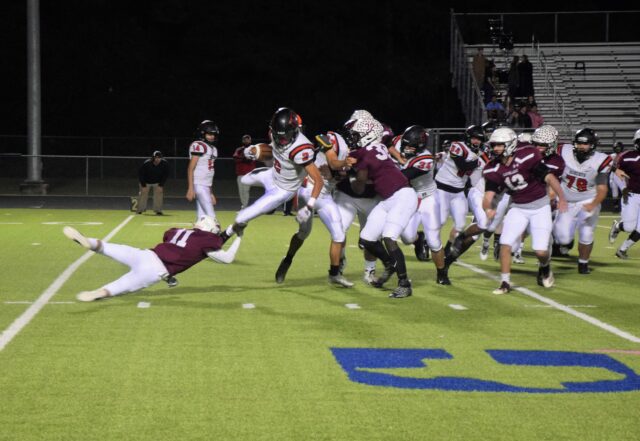 Lovelady Moves into Area Round

WOODVILLE – The Lovelady Lions’ annual postseason voyage began on Friday night as the Lions traveled to Woodville to take on the Hull-Daisetta (HD) Bobcats in the Bi-District Round of the playoffs.

Simply put, the game was a lopsided affair as Lovelady dominated throughout the contest. Had it not been for a pair of gadget plays and a garbage-time touchdown, the Lions may well have picked up their fourth consecutive shutout. As it was, Lovelady won handily by a score of 52-18 and waltzed into the Area Round of the playoffs.

As the game got underway, the Lions’ defense set the tone. Lovelady won the toss and deferred until the second half. HD started with the ball at their own 24 and went nowhere. Dawson Victorian lost two yards on first down and then picked up four on second. Victorian was stopped in his tracks on third down by Lovelady’s Brandon Fry and the Bobcats were forced to punt.

The Lions took over at their own 30 and wasted little time in establishing the run game. Connor Martinez rattled off 20 yards on first down. Shaun Easterling followed with a pair of runs to move the ball to the 35 of the Bobcats and then Martinez did the rest.

Martinez took a handoff from QB Slade Murray, sliced through a seam on the right side of the defense and outraced the Bobcat defenders to end zone. Easterling banged his way across the goal line for the two-point conversion and with 7:47 left in the half, the Lions had taken an early 8-0 lead.

After the kickoff, the Bobcats next possession began at their own 31. HD continued to ride the legs of Victorian but when they opted to pass, Lovelady’s Erik Castillo dropped Bobcat QB Levi Wallace for a nine-yard loss.

The Lions forced the Bobcats to punt once again and Lovelady took possession at their own 30. Murray threw incomplete on first down, but a jet sweep to Kevion Skinner picked up 11. On the next play from scrimmage, Murray called his own number and went right up the middle for a 59-yard touchdown gallop. The Lovelady QB also added the two and with 3:12 left in the first quarter, the Lions now led 16-0.

The next series of downs proved to be a turning point in the game. HD took over at their own 25. Tyler Thibodeaux was held to no gain while an illegal procedure penalty pushed the Bobcats back to their own 20. Thibodeaux picked up 10 to set up third-and-five, but on the next play, Cayden Anders was only able to pick up two yards, making it fourth-and-three from the HD 32.

Rather than settling for a punt, Bobcat Head Coach Randy Birdwell opted to go for it and when Lovelady’s Skylar Pipkin deflected the fourth-down pass from Wallace, the Lions took over at the HD 32.

A chop-block on first down pushed the ball back to the 42 and then Murray threw incomplete. Dayvian Skinner picked up two on second down and on the next play, Murray connected with K. Skinner for a 40-yard TD. Easterling added the two-point conversion and with 10:43 left in the second quarter, Lovelady now led 24-0.

The Bobcats finally found something positive on offense the next time they had the ball. Following the kickoff, HD started at their own 28. On first down, the Bobcats opened up their playbook for a little trickeration.

Wallace turned and pitched the ball to Anders who in turn handed off to Victorian. A pair of Lions bounced off one another and that was all Victorian needed as he took it 72 yards to paydirt. The try for two was no good, but with 10:10 still left in the first-half, the Bobcats had cut the lead to 24-6.

On the ensuing kick, HD attempted an onside kick-off. It didn’t work and the Lions took possession at their own 44. Easterling picked up eight on first down and after an incompletion, he bulled his way ahead for 17 more.

With the ball now resting at the 31, the Bobcats jumped offsides on back-to-back plays. Had they jumped on the next play, perhaps they could have stopped D. Skinner. As it was, they didn’t and D. Skinner crossed the goal line from 21 yards out at the 7:36 mark of the second quarter. The try for two was unsuccessful, but Lovelady now led 30-6.

The Bobcats went back to their bag of tricks the next time they had the ball and once again, they found success. Starting at their own 24, HD lost four on first down when Thibodeaux was dragged down in the backfield.

On second down, however, Thibodeaux took a pitch from Wallace and threw downfield in the direction of Victorian. The Lions had the play well-covered and the ball should have been intercepted. The pass was underthrown, however, and when a pair of Lovelady defenders jumped up for the ball, it was deflected right into the hands of Victorian who took the gift he had just received and raced the rest of the way to the end zone for an 80-yard TD. The try for two was no good, but the Bobcats had cut into the Lions’ lead once again and only trailed 30-12.

That was as close as the Bobcats would get. Another unsuccessful onside kick gave Lovelady the ball at the HD 47. Murray kept it on first down and picked up 37. Easterling bulled ahead for five more but a fumble on the next play pushed the ball back to the 17.

On third-and-14, Murray tried to connect with Pipkin but a Bobcat defender was called for pass interference, putting the ball at the four-yard-line. The next play saw K. Skinner blast his way into the end zone and when D. Skinner converted the try for two, the score now stood at 38-12.

Things would get worse in a hurry for Hull-Daisetta. After the Bobcats took possession of the ball at their own 31, a bad snap gave the ball right back to Lovelady at the 20 when Fry pounced on the rock.

Lance Pierce gained 10 yards on first down and then Murray found Pipkin for six more. On the next play, D. Skinner slipped through the line for a four-yard TD and with 2:57 left in the first half, Lovelady now led 44-12.

A three-and-out from the Bobcats gave the ball back to the Lions with just under a minute remaining in the half.

Starting at their own 49, Lovelady saw D. Skinner pick up nine yards on two carries while K. Skinner ground out 18 more.

With time running down, Murray attempted to find Jayton Crawford in the end zone. The clock hit zero, but Crawford drew a PI call, so Lovelady had one more shot at the end zone. They didn’t waste it as Murray connected with Pipkin for a three-yard TD while D. Skinner added the two-point conversion to bring the half to a close with the Lions up by a margin of 52-12.

After the break, the refs let the clock run. The Bobcats managed to add an eight-yard touchdown from Victorian as time was running down to make the final score 52-18, in favor of Lovelady.

The win gives the Lions the Bi-District Championship and sends them into the Area Round where they will face the Mart Panthers. That game is scheduled for Friday, Nov. 19 in Madisonville, with a 7 pm kickoff.