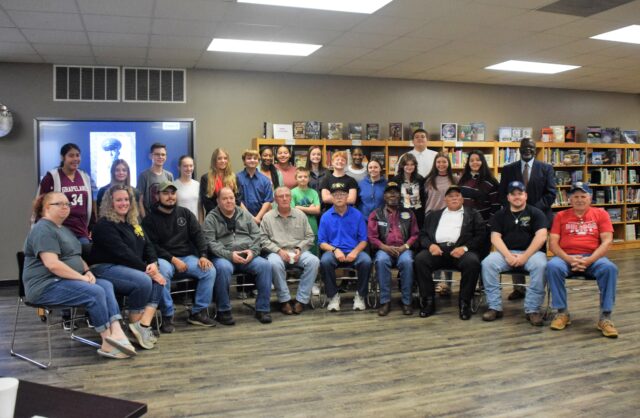 GRAPELAND – Thursday, Nov. 11 was Veterans Day and the faculty, staff and students of Grapeland ISD welcomed those who have served or are still serving to a breakfast at the Grapeland Jr. High Library.

A slide show greeted the veterans as they entered the library. The pictures that flashed by brought some smiles to the former service members as they recalled their times in the military. There were also a few chuckles as some of the photos appeared to show a completely different person from 20, 30, 40 and even 50 years ago.

The veterans were also treated to a short program put on by students from the junior high and high school.

Assistant Principal Channin Spisak kicked off the program saying, “We want to thank y’all for your service to our country. I have an amazing group of students behind me and they have a message they would like to give to you today.”

The asst. principal then turned the program over to the students. Leading off was Cooper LeBlanc who provided the invocation. This was followed by pledges to both the US and Texas flags.

Next, a brief history of Veterans Day was provided to the attendees.

“On the 11th hour of the 11th day of the 11th month in 1918, an armistice or temporary cessation of hostilities between the Allied nations and Germany, in WWI, then known as the ‘great war,’ commemorating the armistice and the next year, it became a federal holiday,” one of the students reported.

After further detailing how the day had changed over the years to honor not just WWI veterans, but to honor all veterans, regardless of when they served, a poem was read.

The poem states, “On Veterans Day we honor all, who answered to a service call. Soldiers young, and soldiers old, fought for freedom, brave and bold. Some have lived, while others died, all of them deserve our pride. We’re proud of all the soldiers who, kept thinking of red, white and blue. They fought for us and all our rights, they fought through many days and nights. And though we may not know each name, we thank ALL veterans just the same.”

At the conclusion of the poem, the veterans in attendance were asked to stand and introduce themselves. This was followed by the playing of the National Anthem as the formal program came to a conclusion.