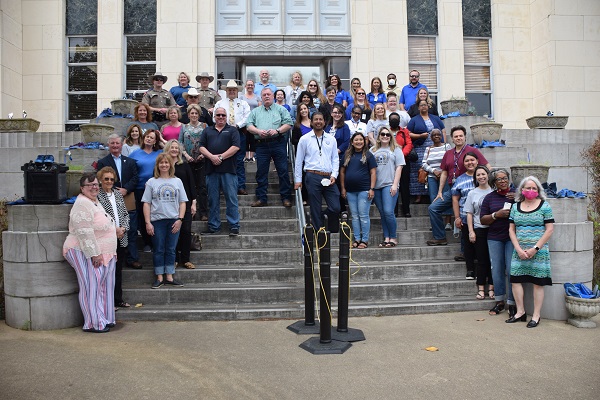 CROCKETT – April is Child Abuse Prevention Month and to commemorate the month, a ceremony was held on the steps of the Houston County Courthouse on Friday, April 8. Community and religious leaders, along with city and county officials were all on hand to mark the occasion.

Tim Allen, pastor and President of the Texas Council on Child Welfare Boards, opened the ceremony as he introduced several of the people and entities tasked with combatting child abuse. Allen added one of the things he loved most about Houston County was the spirit of cooperation he saw among the various entities when it came to this issue.

As he continued, Allen said there had been 826 investigations by the Department of Family and Protective Services during Fiscal Year 2019.

Following several introductions, Allen turned the program over to Charlana Kelly for a word of prayer. Once she concluded, County Judge Jim Lovell read a proclamation declaring April as Child Abuse Prevention Month in Houston County.

The judge also provided some rather disturbing statistics to the attendees.

There were 280,911 cases of child abuse and neglect reported in Texas during Fiscal Year 2019. The number of confirmed victims of child abuse across the state was 66,382 with 120 of those children residing in Houston County, he said.

County Court-at-Law Judge Sarah Clark spoke next and said, “Y’all are here because you care and y’all are here because you are going to doing something important. That is, you are going to make a difference in the life of a child. There are a lot of things we do that do not last forever, but the fact we can do something top protect a child – give a child a place to grow – is something we can all be proud of.”

After a moment of silence, Judge Clark was followed by District Attorney Donna Kaspar.

“We are coming out of a year of unprecedented stress and hardship and our families with children need our support more than ever. This pandemic, along with the economic devastation it is causing, has increased the risk for children, more so than in prior years,” the DA said.

Houston County Attorney Daphne Session was next and expressed her thanks to the various agencies she and her office worked with in combatting the problem of child abuse.

After a few more speakers and following the benediction given by Houston County Sheriff Randy Hargrove, a balloon release was held to commemorate the victims of child abuse.