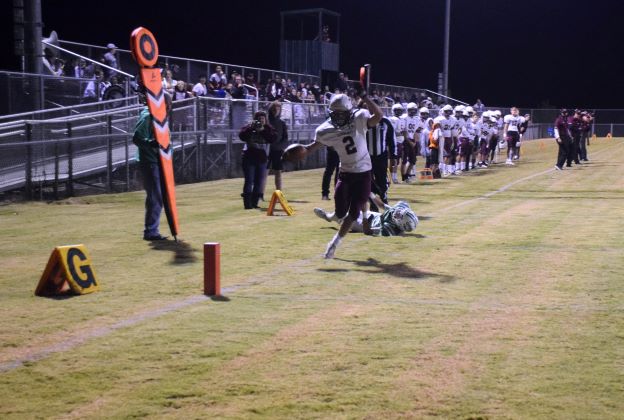 OVERTON – The Lovelady Lions hit the road on Friday night for their regular season finale against the Overton Mustangs.

The Lions came into the contest with a record of 7-2 and a had a five-game winning streak. Overton, on the other hand, had struggled all year and brought a record of 0-9 into the game.

Given those factors, the game went about as expected as Lovelady controlled both sides of the ball on their way to a 43-0 rout of Overton.

As the District 11-2A DII clash got underway, the Lions didn’t waste any time in establishing their dominance. On the first play from scrimmage, Lovelady dialed up a blitz and Overton’s QB Ryder Hagan paid the price as he was hit from the blind side for a 12-yard loss.

It didn’t get any better for the Mustangs on their second play as the Lions picked off the Overton QB and returned the ball to the Mustangs’ 29.

Shaun Easterling picked up six for the Lions on first down. On second down, Conner Martinez did the rest as he broke free on a 23-yard TD run. Easterling added the two-point conversion and with 10:32 remaining in the first quarter, Lovelady led 8-0.

The Mustangs’ second possession began at their own 34. First down saw Cody Davis lay the wood to Hagan for a three-yard loss. Jaylon Griggs picked up three on second down while third down saw a Lovelady interception nullified by a roughing call.

The penalty moved the ball to the Lovelady 47 and on the next play, Griggs rumbled down to the Lions’ 23 for a 30-yard gain. That was as far as the Mustangs would get, however, as the Lovelady defense forced a turnover on downs.

The Lions took over on their own 30 and began a lengthy drive that ended with a touchdown. Easterling picked up 21 yards on first down while Keivon Skinner added 11 on an end around. A pair of rushing attempts by Easterling picked up seven and on third-and-three, Lovelady QB Slade Murray went up the middle for 12.

The drive seemed to stall after Easterling was unable to generate any yardage on first or second down and when Murray’s pass fell incomplete on third down, the Lions were faced with a fourth-and-10 from their own 19.

Lovelady didn’t panic, however, as Murray connected with Caleb Gilchrist for 15 yards on fourth down and moved the ball down to the Overton four. From there, Easterling blasted his way into the end zone and when Dayvian Skinner crossed the goal line on the try for two, the Lions led 16-0 with 1:48 left in the first quarter.

Another Overton turnover brought the first quarter to a close and gave Lovelady the ball deep in Mustang territory. Two plays later, Murray connected with Gilchrist for a 10-yard score to make it 22-0 with 10:49 left in the half.

The ensuing kickoff gave Overton the ball at their 40. The Mustangs moved into Lovelady territory but a fourth down pass was incomplete and Lovelady took over at their own 28.

Easterling burst up the middle for 21 on first down and then added another 31 after an illegal procedure call. D. Skinner gained 10 to move the ball to the 15 and then Murray found Jayton Crawford who caught the ball at the seven and then tip-toed his way down the sideline for six. Murray added the two-point conversion and with 6:08 left in the second quarter, Lovelady pushed the lead out to 30-0.

The Mustangs’ next possession ended in disaster. After Griggs was stopped for no gain, Hagan threw incomplete. Faced with a third-and-10, Hagan dropped back to pass and never saw Cody Davis. Hagan threw the ball behind his receiver and Davis timed his break perfectly. He stepped in front of the pass and took it 42 yards to paydirt for a pick-six. The try for two was no good but with 4:50 left to play in the half, Lovelady now led 36-0.

Overton’s next possession was a three-and-out which gave the Lions the ball at their own 32. D. Skinner picked up four yards on first down and on second down, Easterling found a seam in the Mustangs’ defense.

Easterling blasted his way through the line of scrimmage, made a Mustang defender miss and went 65 yards for a TD. Peyton Harrison knocked the PAT through the uprights and with just over two minutes left before halftime, the Lions led 43-0.

The second half saw the officials mercifully run the clock as the Lions gave some of their lesser experienced players some quality minutes. With very few stoppages, the clock continued to run and brought the game to a close with the Lions picking up the 43-0 win.

The win clinches the second seed out of District 11-2A DII for Lovelady as they head into the postseason. The Lions will next take the field in the Bi-District round of the playoffs as they face the Hull-Daisetta Bobcats on Friday, Nov. 12. The game will be played in Woodville and is scheduled for a 7 pm kickoff.