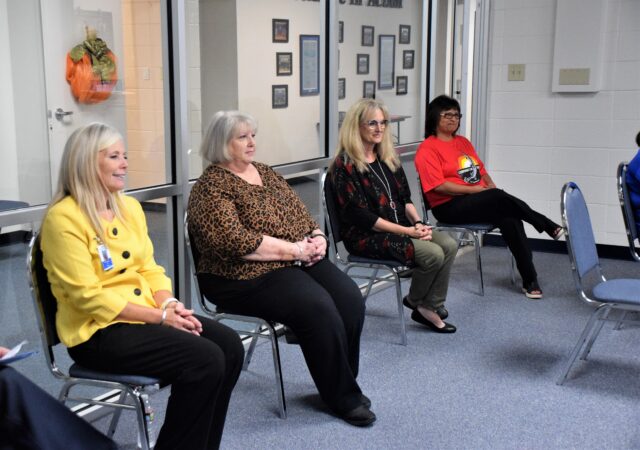 CROCKETT – The Crockett Independent School District Board of Trustees met in a regularly scheduled meeting on Monday evening, Oct. 25 in a session which was highlighted by several reports on the positive direction the district appears to be headed.

As the meeting got underway, CISD Superintendent John Emerich spoke about some of the district accomplishments during his report to the board.

“There are a lot of good things to report this month,” he began. “First of all, I would like to publicly recognize and thank all of our principals. October is National Principals’ Month. We have celebrated them in the paper but I asked them to be here tonight so you could also celebrate them. I think we have a good team; we are working towards doing some great things here in Crockett and these four ladies are a big part of that.”

As he continued, Emerich spoke about a new program on the CISD campuses known as Raptor.

“We bought this program and some machines that go on every one of our campuses. When a visitor comes on campus, they have to give their drivers’ license and it is run through the machine and it immediately does a background check on them. It prints out a badge immediately for the visitors with a picture from their license,” he said.

Emerich also provided the trustees with an update on the sale of the former state school property.

“We are expected to close tomorrow (Tuesday, Oct. 26), so this long journey is finally ending. That is what I am being told by the title company. I do know the group purchasing the state school got some instructions to wire the money to the title company today and they have done that. The money is there so we are waiting for title company to call us in to sign on the dotted line. Hopefully that will happen tomorrow,” he said.

The former state school property was acquired by CISD from the city of Crockett – approximately 3.5 years ago – for $650,000 in cash along with the district’s $61,000 transportation facility. An unsolicited bid of $3.2 million was submitted by Houston-based company Merkabah, Inc. in April of 2020 and accepted by the CISD board.

As previously reported in The Messenger, CISD is one of only four Texas schools to receive part of a three-year, $12 million grant from the federal Teacher and School Leader (TSL) Incentive Program. In partnership with the National Institute for Excellence in Teaching (NIET), Crockett ISD will use its $2.5 million portion to invest in the district’s educators and school community to accelerate student achievement and combat the learning loss caused by the COVID-19 pandemic.

The school board meeting also saw the district adopt a new motto.

“We would like to adopt a new motto that we have already been using. Instead of ‘Every Child. Every Time,’ we are going to change to ‘One town. One school. One Family.’ We came up with that this year. It was a collaboration of everyone here and we just feel like it is kind of what we are aiming for,” Emerich said.

A motion was made, seconded and unanimously approved to change the district motto.