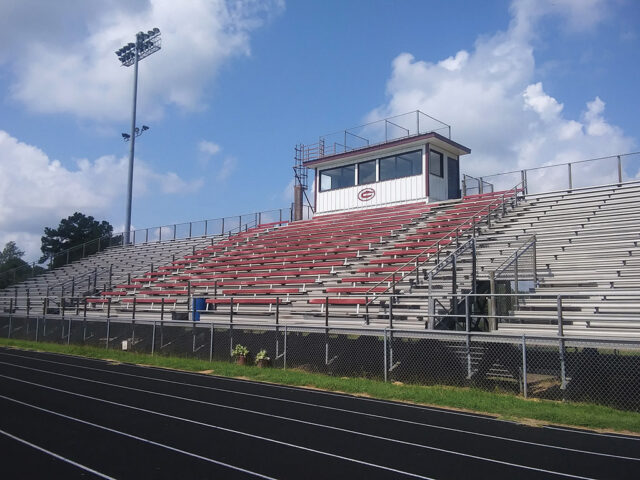 Nothing the Smell of Freshly Cut Grass

and an Order of Nachos Can’t Cure…

EAST TEXAS – With the start of football season just around the corner, it can be difficult for anyone who has experienced even a portion of a small town football game to keep their enthusiasm in check. Young people from our area will soon take to the practice fields to prepare for the upcoming season. Whether it be as a starting player, a backup, a trainer, a member of the marching band, a majorette, a cheerleader, or one of many other contributors to what has become such a large part of schools and communities, these young people will put in countless hours of work to contribute to the experience of high school football fever.

The older I get, the more my silhouette bears resemblance to the likes of Refrigerator Perry or Tony Siragusa. As such, people who did not know me growing up might guess I was a starting offensive guard or maybe a nose tackle. Those people would be wrong.

I was not a starter. I was not a guard or tackle or any other position. I was a band geek.

I can use that word because I mean it in the best possible way. I am also referring to myself, but I, in no way, would try to claim it as my own. It is a badge of honor that I wear proudly, and hope every other band geek on the planet embraces as well.

During the fall of 1983, I was embarking on what would be my final marching season as a member of Grapeland High School’s Fighting Sandie Band. It was a good time. I was a six foot tall Sousaphone player – you know, the big circular brass instrument most folks call a “tuba” – so I could neither hide nor make mistakes that didn’t stand out like a bad toupee. At that time, band was embraced at our school. We typically had around 60 students in formation, and we performed quite well. In 1983 and 84, the band achieved first division status at several invitational events and at the UIL state level. That’s like a gold medal. We provided the soundtrack to games. We entertained at halftime. We enjoyed epic laughter during bus rides home. We had an amazing experience.

Somebody is about to embark on that same journey in a few weeks. Actually a lot of somebodies. A lot of lifelong friendships will be cemented. A lot of stories will be created which will be shared time and time again in the coming years. That’s what it’s all about.

One might think that all my football memories would be band-centric. I’m sure that most of my memories are somehow tied to band, at least in some random way. I likely was wearing that uniform, which lends heavily to the olfactory center of the memory gland. It was always either musty, due to being worn by a hormonal teenager, or smelled like dry cleaning fluid. Neither of which was great, but definitely added to the experience. But other than the peripheral band connection, my high school football game memories are much the same as every other participant and spectator.

I can only refer to it as “stuff.”

There is easy and obvious stuff – like the smell of fresh cut grass, mixed with a cool fall breeze. I could actually stop there, because that’s one that hits everybody and we all like it a lot. But I won’t. I have a lot of this “stuff.”

It starts with the arrival. Stepping out of your vehicle or off your bus, you are greeted by stadium lights, the buzz of the gathering crowd, and maybe the sound of bands warming up and players sounding off during warm-ups. Passing through the ticket area and grabbing your program. Scanning the bleachers for a good seat near friends. Settling in with a blanket. All necessary “stuff.”

At some point we have to enter the food arena. Many of our area schools have pretty major concession experiences. You might find great burgers and dogs, or barbecue, or the classic sausage on a stick. But there are two concession items that will always remind me of the high school football experience; Frito pie, served in the sliced open bag, and nachos with the canned cheese and pickled jalapenos.

Excuse me while I get a little teary eyed.

These are not, by any means, fine dining items. Not even close. But they are classics, and a single bite – a single whiff – sends me straight back to any of the east Texas football stadiums I was privileged to experience in my youth.

Walking through the stadium today is a different experience than in the 1970s and 80s; Today’s more modern and user-friendly facilities are a far cry from the Sandie Stadium of my youth. Gone are the rock structures that made up the band hall and restroom facilities. Gone are the wooden bleachers with gaps through which one could lose a small child. I don’t recall any children falling through, at least not by accident, but those of us in our adolescent years who played under those bleachers retrieved many a purse, wallet or stadium seat cushion. It also paid to keep one’s head on a swivel to be aware of the inevitable falling cold drink or container of those previously mentioned nachos. I loved eating them. Hated wearing them. But those fantastic old bleachers were a major part of the experience. Friday night was a community event, friends and neighbors sitting elbow to elbow cheering on bonafide Friday night heroes, win or lose.

We are, once again, on the cusp of one of the great annual experiences for east Texans. While my younger self thoroughly enjoyed the heat of summer and all it had to offer, my older self seems to embrace that cool fall breeze, which evolves to a considerably stiffer winter breeze by the end of the season. If only I could squeeze even a single arm into my letter jacket…

Jason Jones may be contacted via email at jjones@messenger-news.com.