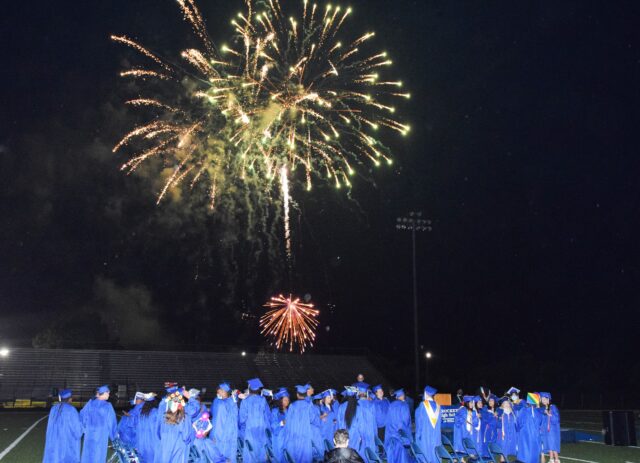 GRAPELAND – The number of Crockett High School alumni increased Friday evening, June 4 when 82 CHS Seniors sauntered across the stage, received their high school diplomas and embarked on the next phase of their lives.

As the clock struck 8 p.m., the sounds of “Pomp and Circumstance” filled the rainy night at Monte Jack Driskell Stadium as the first smiling seniors made their last walk as students at CHS.

Once the graduating seniors settled into their seats, Aaron Dotson assumed the podium and provided the ceremony’s invocation.

Following the opening prayer, Emily Allen and Erick Villanueva Barrientos led the pledges to the American and Texas flags, respectively.

Once the pledges had been given, a recorded rendition of “The Star-Spangled Banner” by the Gaither Vocal Band was played over the PA system. As the last notes of the National Anthem began to fade, Katie Bradshaw took the stage to welcome those in attendance and to introduce the CISD Board of Trustees, as well as the district administrators.

At the conclusion of the welcome, CISD Superintendent Johns Emerich provided the audience with his opening remarks.

“What a year we have had! At the start of the year, we were all afraid and didn’t know whether we would live or die (thanks to COVID-19). How were we going to be able to have school? This class sitting before you now, however, was able to have a full school year. It wasn’t always normal and we wore masks most of the year. Some of us got sick during the year, but we are here tonight. We are grateful for that and it is something this class will always remember,” Emerich said.

He also announced if any of the soon-to-be graduates decided to pursue a career in education, CISD would reward the alumni with a $5,000 signing bonus, if they chose to teach in the CISD system.

Once the superintendent concluded, High School Principal Deborah Revels recognized the Honor Graduates, while graduating senior Crystal Brown recognized the National Honor Society Members. She was followed by classmate Khushi Bhatt who recognized Red Cord Recipients – those who had donated blood at least twice during the school year.

Elizabeth said being named Salutatorian was a surprise to her as she thought she was third in her class. However, she continued, despite having to overcome her fear of speaking in public, Elizabeth felt it would be a good opportunity to “… appreciate those who have helped you in life and to remember the memories you have made in high school, as they will be a part of you.”

Following the Salutatorian address, Valedictorian Gloria Hernandez took the stage and thanked everyone who had been instrumental in helping the Class of 2021 to reach this milestone.

“Thank you all, once again, for coming to celebrate this journey that has lasted for 12 plus years in which the students before me have endured and are about to bring to a close. Through many all-nighters that were pulled and restless nights that kept some of us from having enough sleep, it all seems to be worth it in the end,” she said.

With the ceremony nearing the moment the 82 seniors had long awaited, High School Principal Deborah Revels took the stage once again to certify the class.

Superintendent John Emerich was then joined on stage by the Board of Trustees as they began to confer the Class of 2021 with their diplomas. As the seniors walked across the stage, parents, relatives and friends showered the graduates with applause and shouts of joy and pride.

Cierra Simon followed and paid homage to the faculty and staff of CHS as she officially presented the CHS Class of 2021.

In the wake of the diploma presentation, the 2021 CHS class led the audience in the school song while Aaliyah Price brought the ceremony to an end as she provided the benediction for the newly minted graduates.

Before the recessional began, the lights in the stadium went out. While many thought it was a glitch in the electrical system, that thought was quickly dispelled as a fireworks display lit up the night skies over Crockett to help celebrate the graduation of the CHS Class of 2021. The fireworks were made possible through private donations and no school funding was used for the display.